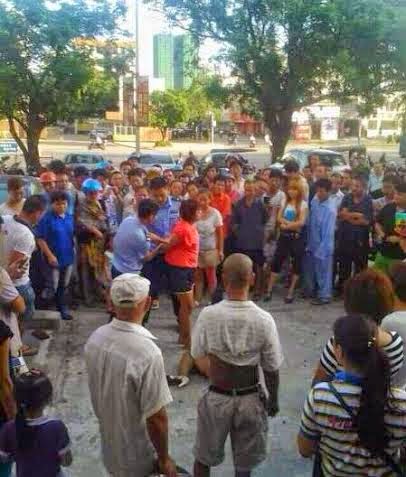 (Wenzhou, Zhejiang—Sept. 24, 2014) Since late August, four Wenzhou-area churches in China’s coastal Zhejiang province have reported cross demolitions, many of which resulted in the serious injury or detention of local Christians. Believers also told China Aid that a Zhejiang newspaper recently featured articles defending the “Three Rectifications and One Demolition” campaign, in which they accursed overseas “hostile forces” of exploiting the situation in order to “stir up trouble.”

The Pingyang County Government of Wenzhou dispatched more than 1,000 police to a small division of Pingyang County to demolish the cross topping Guangming Church in the early morning of Aug. 28.

After arriving, the police cordoned off all intersections leading to the church.

Believers said that it was the lack of Christians on site to guard the church, due to their attention being diverted, that allowed authorities to outnumber them and successfully demolish the church’s cross.

Additionally, believers overheard a security guard who participated in the forced demolition state that everyone was being paid 300 yuan (US $48) for their work. To dispatch and pay 1,000 workers would cost 300,000 yuan (US $48,800), not counting any equipment costs.

“If they used the money in areas hit by natural disasters, it would be worth it,” a worshipper said. Several church members expressed discontent at the misuse of taxpayer money.

Pingyang authorities also targeted Shangzhou Church for demolition. Believers were able to thwart authorities four times, most notably on Aug. 27, when a violent conflict resulted in the beating of at least 13 with three people hospitalized. However, on Sept. 4, more than 1,000 police officers were dispatched to Shangzhou Church where about 20 believers who had been guarding the cross were detained.

Christians said that the authorities were successful on Sept. 4 in part to a tactic they implemented the day before when a group of government-hired men showed up at the church pretending to be believers protesting the demolition. The group was even wearing t-shirts from the church, church members said.

After the group entered the church building, they quickly established control of the entrances and made their way to the top of the building. Shortly after, police officers and urban management personnel arrived and formed a perimeter around the church building. Around midnight, police detained the approximately 20 believers who had remained behind and bound themselves to the cross while others went home to rest. The cross was quickly demolished after the believers were removed.

The next day, Sept. 5, some of the detained worshippers were released. More of the detainees were released on Sept. 13, which marked the end of a nine-day administrative detention sentence, for charges of “hindering traffic,” given to them upon their apprehension. Those released on Sept. 13 included Zeng Yurao, a member of the Loving Care Center of Shenzhen, Guangdong, who had come to Wenzhou to support Shangzhou Church. Three others remain in custody.

In another subdivision of Pingyang County, several hundred government employees arrived at Chuiyang Church on the early morning of Sept. 10 to demolish the church’s cross.

Prior to the demolition, authorities had attempted to take down the cross but were met with resistance from church members. The attempt resulted in a physical conflict, which left several elderly Christians severely injured. Two of the injured were hospitalized.

Other churches that had been recently targeted include Chengxi Church in Rui’an, Wenzhou, where the cross was demolished. Three churches have withstood demolition attempts thus far: Xianqiao Church, Zengshan Church and Duikou Church. These churches have all received multiple demolition notices and have been told that if they resist the demolition of the crosses, their entire church building will be demolished.

Meanwhile, the “Zhejiang Daily” ran a series of articles from Aug. 18-28, which defended the demolitions. An article on Aug. 22, titled “Religious Freedom and Three Rectifications and One Demolition are not in Conflict with Each Other,” stated that the Party’s consistent policy is to guarantee people’s religious freedom. It goes on to say that during the demolitions of building that violated regulations, some small-town leaders failed to pay attention to the manner in which the demolitions were carried out, which caused Christians, spurred by religious sentiment, to be vehemently against the campaign.

As of Aug. 7, the number of persecuted churches affected by the Zhejiang demolition campaign had reached 231, with unofficial accounts saying that number has reached more than 360 and continues to grow.