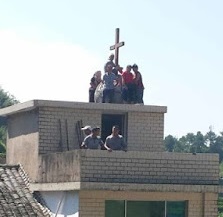 (Wenzhou, Zhejiang—Aug. 27, 2015) Constant Christian opposition failed to deter officials in China’s coastal Zhejiang on Aug. 6-7 as they executed their plan to remove several more church crosses in the prefecture-level city of Wenzhou; only one church’s cross survived the planned demolition.

Officials in the city of Rui’an attempted to demolish Wukeng Church’s cross on Aug. 6; however, the cross remains standing thanks to church members’ refusal to back down despite the officials’ violent actions. Six women were hospitalized after they were injured while they hugged the cross in an attempt to protect it.

At around 11 p.m. on the same day, Christians in Pingyang County noticed more than 20 government vehicles, carrying officers in the direction of several churches.

Shortly after midnight on Aug. 7, government personnel arrived at Caobao Church in Pingyang County. Police blocked all the entrances to prevent unauthorized transportation from entering the compound. According to one church attendee, the officials didn’t grant church members access to their building and prevented the ones already inside from leaving.

“We can’t go outside even if we want to,” a church member told China Aid’s reporter. The church member also said that the police at Caobao Church would also remove the cross topping Sabbath Church, which is located across the street from Caobao Church.

Once the resisting Christians at Caobao Church were successfully disengaged, the officials cut down the cross. Some church members at the scene expressed concern that other churches would suffer a similar fate that night.

The simultaneous destruction of Meiyuan Church’s cross, also in Pingyang County, confirmed their fears. As in the previous incidence, officials barricaded the road and refused to allow Christians inside the church to leave. In less than an hour, police successfully destroyed the cross.

The local government also sent more than 700 officials to Rui’an’s Sunao Church on Aug. 7, which church members had been guarding for 20 days. During the cross’s demolition, an 11-year-old girl resisted the authorities’ actions by singing “The Cross is My Glory.”

Other churches whose crosses were removed from Aug. 5-7 include Shanqian Church in the Wenzhou city of Yueqing, another church in Yueqing, Nanshuyang Church in Pingyang County, another unnamed church in Pingyang County, and Fanxia Church in Yongjia County. Authorities have also threatened to remove the crosses from another church in Rui’an and from churches in eight other sub-districts of Wenzhou. Authorities in Huzhou, Zhejiang also threatened Zhacun Church, causing the church to release a letter calling for help.

Christians in Wenzhou noted that government officials are currently targeting churches with smaller congregations. According to a local church member “… [The officials] do not dare to remove crosses of churches with many members. They are removing crosses of churches that have fewer people and are located in rural areas. Many church members are guarding their cross … It will not be easy for them to remove them, unless someone in the church compromises. Then, they will be able to remove church crosses faster. If we do not compromise, it will not be that easy for them to remove the church crosses.”

Officials stated that they plan to raze the crosses atop 135 churches in Pingyang County, indicating that they have no plan to halt further demolitions. In the two weeks spanning from July 24-Aug. 7, the government tore down 30 church crosses. Some churches hired lawyers to protect their legally mandated rights as a result of these on-going attacks.