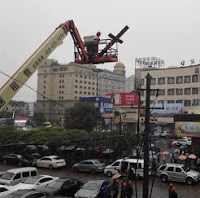 In addition, officials attempted to forcefully take the cross of a small church in Wenzhou on July 23, but Christians successfully protected it. One church member clung to the cross and sat on the ground to prevent its removal. After encountering this difficulty, the government personnel halted their endeavor.

When China Aid’s reporter confronted the Wenzhou Three-Self Patriotic Movement and the Wenzhou Christian Committee asking for an explanation, they responded that they were not aware of the demolitions.

Zhang, a pastor of a church in Wenzhou, noted the discrepancies between the government’s “Three Rectifications and One Demolition” campaign and the forced removal of church crosses in a July 22 public declaration. He argues that disposing of the crosses breaches the essence of the “Three Rectifications and One Demolition” campaign via the desecration of government-approved churches and destroys the morale of Christians dedicated to both their faith and China.

Lin, a Christian from Wenzhou, informed China Aid that churches across the county submitted a unified declaration to their local government. In response, the government issued a notification to every church, saying they want to regulate all of the churches in the county. Lin says, “Every church rejects this regulation. The official lawsuit has not been declared yet.”