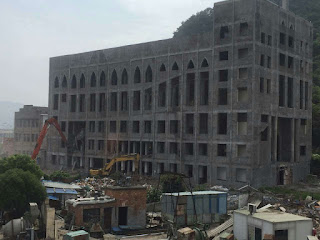 Members of Yanxia Church in Zhejiang’s Wenling told China Aid that church leaders had reluctantly agreed to allow the government to demolish the church building under the conditions that the government would give the church a new location of the same size and compensate them monetarily.

“It cost more than 10 million Yuan (U.S. $1.6 million) to build this church,” another Christian said on Tuesday. “Yesterday morning at 8 a.m., the demolition process started. The government used machines to demolish the church, and police blocked the roads. I was told it would take up to five days to finish the demolition.”

Other church members said that the church leaders were left with no choice but to consent to government officials seeking the demolition, who said that church was an “illegal building” without proper paperwork and that a major highway intersection was planned for the location.

“They did discuss the demolition with us but left us no choice. We did not want to demolish the church,” a church member said.

Church members also voiced their skepticism about the government’s trustworthiness in the matter.

Church persecution has continued in other parts of Zhejiang as well. One Christian, Mr. Zhao Lizhong, has been missing for over a month since he was detained by the Lishui Public Security Bureau on May 9 for defending Pingyuan Church’s cross.

Relatives and church members have been unable to obtain any information about Zhao, who, according to relatives, suffers from several diseases.

On June 4, members of Lishui’s Dengcheng Church staged a sit-in in front of their church while holding banners that read “Lift up the cross,” “Against the forced demolition of crosses, “Protect religious freedom,” and other slogans.

Despite the oppression, 16 churches in Zhejiang re-installed their crosses after the structures were removed in May.

Persecution has been ongoing in Zhejiang since the beginning of 2014. More than 425 churches have been affected during the “Three Rectifications and One Demolition” persecution campaign; however, the number is speculated to be significantly higher.