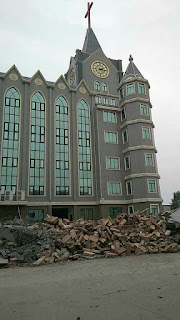 At the beginning of March, authorities in Zhejiang demanded that Three-Self Churches install surveillance cameras and have been dispatching officials to forcibly set up the devices if the order meets with refusal. Officially, the reasoning for the cameras are “safety” and “anti-terrorism” precautions. They also said they would take into account whether or not the church had previously resisted cross demolitions during a province-wide campaign and would send more agents to the site if it had.

From March 21-24, hundreds of police officers converged on Changlin Church in Wenzhou, Zhejiang, in order to carry out this task, beating any Christians who resisted their efforts. A local Christian said the church members questioned why they needed additional surveillance since Three-Self Churches are already heavily monitored and policed by the government. Some Christian women stationed themselves outside the church, fearing a possible church demolition, and were seized for their resistance, then released once the cameras were set up. Officials also destroyed the church’s reception desk and other parts of the building, including the church’s gate in order to get in.

On March 23, Shengai Church in Pingyang County, Wenzhou, issued a statement accusing the government of violating the privacy, disrupting the internal affairs of religious organizations, and breaking laws by installing the cameras. The church claimed the government had no legal basis for these actions, saying that it needs to obtain the permission of the church or would otherwise result in an abuse of power and religious freedom.

ChinaAid exposes abuses such as those experienced by churches in Zhejiang in order to stand in solidarity with persecuted Christians and promote religious freedom, human rights, and rule of law.