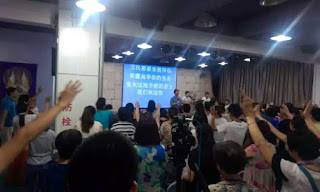 (Zhengzhou, Henan—Dec. 1, 2018) Authorities raided a church located in Zhengzhou, the capital of China’s central Henan province, on Nov. 25, forbidding them from having services.

The church, located in Zhengzhou’s College Town, was holding a Sunday gathering when more than 10 police officers and religious affairs bureau personnel broke in, outnumbering the less than 10 attendees. According to multiple church members, the service was shut down.

One Christian who was present said the next day, “More than 10 police and personnel from the religious affairs bureau came by yesterday. Church belongings, including a piano, a guitar, hymnals, and books were taken. The police also didn’t show us inspection papers.”

The church was established about 10 years ago and consists of more than 30 people. Each Sunday, only a handful of people attend it. However, they can’t hold normal church services due to restrictions imposed by the Chinese police. Some of the church members have begun holding church meetings in their homes because of their fear that they will be arrested.

After China introduced increased religious restrictions in its revised Regulations on Religious Affairs, local Henan officials began cracking down on churches, making the province one of the most severe areas of Christian persecution.

ChinaAid exposes abuses, such as those suffered by Christians in Henan, in order to stand in solidarity with the persecuted and promote religious freedom, human rights, and rule of law.