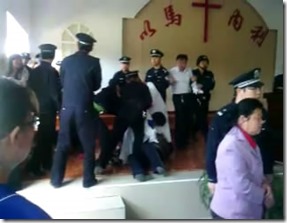 On April 28, 2013, local officials from the office of religious affairs in Zhuoqi, Inner Mongolia raided the Zhuoqi Gospel Church. Since then, the church members have continued to endure pressure and intimidation from the United Front Work Department of the CPC Central Committee. They have not been able to meet for regular worship services. Entry into the church’s original sanctuary is prohibited, nor is the pastor allowed to even go back to the church.

It was around 8 o’clock on the morning of the 28th when the congregants were praying at a Sunday church service. Suddenly, about 60 policemen led by many religious affairs officials stormed into the building. Some of the policemen were fully armed as riot police. They busted their way to the podium and took hold of the worship leader, worship assistant, and even the pianist and choir. Presenting no valid legal permit, the police used force to rob the church members of their right to religious freedom.

During the police attack, some female believers were so scared and they fainted. Out of kindness, some reached out to hold the frightened women. But as a result, they were pushed to the floor, punched, and kicked. After witnessing this scary scene, a 70-year-old man fainted. When a 50-year-old woman was just about to hold the collapsed man, three police officers took hold of her and tied her arms behind her back. As she was struggling with the three police, two more walked up to her, punched, and kicked violently at her. After being severely beaten, the woman almost lost her consciousness.

The police also pepper-sprayed the church members. The choking smell quickly spread throughout the sanctuary as many sisters coughed so violently that they could hardly breathe. They could barely open their eyes. They also felt searing pain as their eyes were tearing up. A five-month pregnant woman had a severe reaction to the pepper-spray. After temporarily losing her consciousness, she threw up violently. She is still in bed and recovering today. Even some police were affected by the pepper-spray; they were able to go out to wash their face and breathe the fresh air though. The church members were all locked in the building.

The police also destroyed and confiscated some of the church’s properties, such as the offering box and a cross on the wall. They also robbed some church members of their personal bags. The police would open some of the bags and take away the things they deemed important, such as Bibles, hymns books, etc. They destroyed the church’s name signs on the wall and left them smashed on the floor.  The police shouted at the church members with anger, saying, “We should have used a bulldozer to demolish your building to the ground!”

Treated like criminals, some church ministers were thrown into the police cars. They were transported to a nearby police office in Bayanhaote ailute and forced to sign some documents. They were finally released after a quick interrogation. Meanwhile, the choir members and some congregants were taken to the neighborhood committee of Baoqiaoshetou. Bin Li, a staff from the United Front Work Department (UFWD) in Zhuoqi was asked to do some “ideological work” on the church members. He threatened them by saying, “If three or five people gather at home to read the Bible and worship, it is OK. But never again should you gather as a large group in the church sanctuary. If you want to worship in a big church building, go to a Three-Self church. If you disobey what I say, we will continue to oppress you.”

Chaogeda, a spokesperson from the office of religious affairs in Zhuoqi, read a document to the believers stating that they were being convicted of an illegal gathering. As a house church, Zhuoqi Gospel Church was said to have violated Article 43 of the Regulation on Religious Affairs: “Unauthorized establishment of religious activity sites shall be banned by the department of the religious affairs.” Due to this violation, the police shut down the church. Since the morning of the raid, the deacon board of the church has submitted inquiries to the Gualameng and Zhuoqi governments. But the reply they received was another effort of the government to get them to join the local Three-Self church. The government’s reason – the Three-Self church has a bigger worship building; they can accommodate 500 people, and still have seats available. Currently, worship service at Zhuoqi Gospel Church is fully stopped.

Mr. Ao, secretary of UFWD, threatened the church members, saying, “We will hunt you down if we ever see you worshipping together. Maybe we won’t make a move during the day, but we will go into your home and get you at night.” The pastor has not been able to go back and minister at the house church. If he ever goes back again, he will be fired from his pastoral position with a local Three-Self church. Zhuoqi church’s building should never be used for worship service again. If used, the landlord will be fined until the property gets expropriated.

ChinaAid is closely following the unfolding of the Zhuoqi Gospel Church’s case. This is yet another case where the government is unlawfully depriving Chinese citizens of their right to freedom of religion. Article 36 of the Chinese Constitution articulates: “Citizens of the People’s Republic of China have the right to freedom of religion and worship.” In order to protect their right to religious freedom, brothers and sisters of the Zhuoqi Gospel Church tried to contact their local government. But the government refuses to budge, suggesting them to attend worship service in nearby Three-Self churches.

1. Human beings are endowed with alienable rights to freedom of religion and worship.

2. Belief in God and evangelism is the mission that God assigns to every true Christian.

3. Every Christian, domestic and abroad, has the right to worship God in whatever way they deem appropriate.

4. This right is not to be deprived of or imposed conditions upon.

5. We warn the Zhuoqi government that they do not have the right or legal authority to deprive people of or limit their right to freedom of religion.

6.We hope that the local government officials will rectify their mistakes and unlawful acts. They need to stop persecuting the church members and limiting their normal religious activities.

We call on the international society and human rights organizations to pay close attention to the ongoing “elimination of religion” propaganda that is currently taking place in China.