ChinaAid was founded in 2002 on the announcement of death sentences for five Chinese house church leaders. In response, a mission was conceived to Expose-Encourage-Equip, and ChinaAid issued its first press release after meeting with Members of Congress and their staff, revealed details of these cases with then-Chinese president Jiang Zemin, launched its first letter-writing campaign, and sent its first team of trained human rights lawyers to defend those being persecuted. In the end, the five death sentences were overturned.

Over the past 15 years, ChinaAid’s mission has evolved to one of exposing human rights abuses and promoting truth, justice and freedom by advocating for religious freedom and the rule of law in China. ChinaAid continues to endeavor for the immediate release of prisoners of conscience, equip human rights defenders and religious and community leaders with religious freedom and rule of law training, rescue and resettle persecuted leaders and their families, encourage families of prisoners of conscience by providing financial assistance, and exposing abuse by featuring unique stories of persecution and injustice on ChinaAid’s website and through social media. 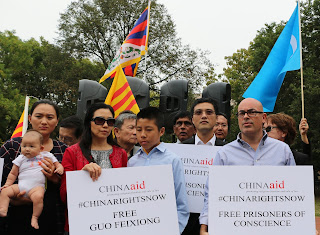 ChinaAid provided legal aid for the Xiaoshan House Church case, in which three Christians were sentenced for “supplying intelligence to foreign organizations” and the case of Shi Wiehan, who was tortured for not providing information on other Christian leaders.

ChinaAid launched a campaign for the release of Alimujiang Yimiti, an ethnic Uyghur who converted from Islam to Christianity. The same year, Fu was awarded the John Leland Religious Liberty Award by Southern Baptists of America, and along with four human rights activists, met with President George W. Bush in the White House Diplomatic Reception Room. Fu was also invited to the European Union headquarters in Brussels to draw attention to the cases of lawyer Gao Zhisheng and the persecution of Alimujiang.
2008

ChinaAid assisted Gao Zhisheng’s wife and two children and lawyer Guo Feixiong’s wife and children secure refugee status and claim asylum in the United States. ChinaAid later presented a “Free Gao” petition with more than 50,000 signatures to the United States Senate, Secretary of State Hillary Clinton and the Chinese embassy. ChinaAid also facilitated its fifth delegation of Chinese lawyers to testify at a hearing of the United States Congress’ Tom Lantos Human Rights Commission on “The Current Situation of Religious Freedom and the Rule of Law in China.”
2009

ChinaAid provided legal assistance to the Guangzhou-based Liangren House Church, which was forced to hold its services outdoors and Pastor Wang “Joshua” Dao who was placed under criminal detention. ChinaAid also hosted a sixth delegation of human rights lawyers to attend a hearing on human rights in China at the European Parliament’s Human Rights Commission in Brussels. Fu ended the year by attending the Nobel Peace Prize award ceremony for human rights and democracy advocate Liu Xiaobo.
2010

Bob Fu testified on Chen Guangcheng’s behalf at a congressional hearing following Chen’s escape from house arrest to the United States embassy in Beijing. Fu’s testimony assisted Chen and his family’s release to the U.S.
2012

In response to quickly escalating persecution, ChinaAid uncovered a sudden crackdown on China’s human rights lawyers and advocates which began on July 9, 2015, and later became known as the “709 incident” or simply “709.” During this time of upheaval, ChinaAid allocated resources to assisting the lawyers and their families in their battle to defend freedom. ChinaAid also helmed international media coverage of a province-wide church and cross demolition campaign that eradicated more than 2,000 crosses in China’s Zhejiang crosses and resulted in the arbitrary detention and arrest of hundreds of Christians, including human rights lawyer Zhang Kai.
2015

In April 2016, ChinaAid broke the news of the murder and martyrdom of Ding Cuimei, a Christian woman buried alive for defending her church from a demolition caused by a land dispute. The resulting international media attention successfully pressured the local government to rule that the church could keep its land.

As 2017 progressed, ChinaAid responded to the continued persecution of Christians and human rights lawyers by organizing trips to Washington, D.C., for the victims’ families so that they may share their stories with key U.S. policymakers. Subsequently, they earned the cooperation of numerous members of Congress and the Senate.
2017