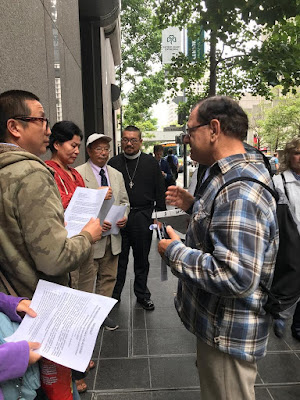 
(Washington, D.C.—July 11, 2019) Individuals across the United States marched in front of the offices of Squire Patton Boggs, a law firm providing lobby services to countries known for persecuting religious practitioners, in order to advocate for religious freedom.

ChinaAid participated in the March located in Washington, D.C., and Geng He, the wife of missing Chinese human rights lawyer Gao Zhisheng, attended the San Francisco rally along with Rev. Jonathan Liu of the Chinese Christian Alliance for Righteousness.

The organizers of the rallies, which included Save the Persecuted and other organizations, chose SPB offices as the sites of the protests because the law firm currently provides lobbying services to Saudi Arabia, China, Cameroon, the Palestinian Authority, and Qatar, all of whom either allow others to persecute their religious citizens or participate in the oppression themselves. In providing these services, the SPB attempts to influence U.S. policymakers on their behalf.

Last May, 50 organizations signed a letter urging SPB’s CEO, Mark Ruehlmann, to drop religious freedom abusers from the firm’s clientele. The letter can be read here. At the time the piece was written, it was not known that SPB also represented Cameroon and the Palestinian Authority.