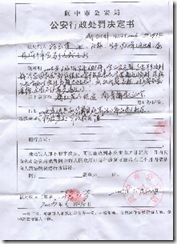 Photo: Detention paper by Langzhong City  PSB, Sichuan province
(Midland, Texas (CAA)-July 14, 2006) CAA learned that a prominent female House Church leader was imprisoned in Jilin province on July 14, 2006. Additionally, in the past few days, 17 House Church pastors were detained at Henan and Sichuan Province.
According to eyewitness reports, on July 11, pastor WANG Jinhua, a prominent House Church leader in China was arrested along with her husband Mr. XU Jinfu and their 8-year-old son XU Enze from their home in Fengman District, Jilin City, Jilin province. Sources familiar with this arrest told CAA that the 8-year-old boy was released after some members of the church led by pastor Wang went to the PSB of Fengman District of Jilin city to ask for the boy’s release.
After being interrogated for three days and nights, pastor WANG was transferred to Baishan Prison in Baishan Town, Jilin city. Her husband Mr. XU Jinfu was released on the same day. The interrogators signed their date of pastor WANG’s transfer and Mr. XU’s release as July 12th instead of July 14th in order to cover their illegal extension of summon time.
Following the couple’s arrest, another major leader of that church pastor YU Peng was forced to flee and is now on the run because he was put on the wanted list by the government. At least 3 other leaders of that church were questioned by the PSB of Jilin city. They were asked about pastor WANG’s relationship with “Three-Grade Servant”. “Three-Grade Servant” was a controversial religious group whose six major leaders including its Founder XU Shuangfu were sentenced to death on July 5, 2006.
Pastor WANG used to be a leader in the “Three-Grade Servant” group.  However she left that group ten years ago and started her current evangelical house church.
Meanwhile, at 9:30am on July 9th, 15 House church leaders were arrested at Nanyuan House Church, Wangcun Town, Wolong District, Nanyang city, Henan province. 20 PSB members with 5 police vehicles raided the church when about 30 church members were having their Sunday service. According to eyewitness reports, PSB members broke the door of the church and confiscated the church offering box and loudspeaker. Four of them were released in the afternoon on the same day. 11 of them are still being detained. Five of them received criminal detention papers at Shangzhuang Detention Center and six received administrative detention papers at Yong An Lu Detention Center. The arrested 11 leaders were accused of “engaging evil cult” activities. CAA learned 10 names of the arrested. They are pastor LIU Wanlong, WANG Jie, CHEN Tongqing, CHEN Guangzhou, CHEN Guangzhi, ZHANG Wei, Xiao Qin(whose last name is not available), Xiao Fei(whose last name is not available), DUAN Xiaotong and his wife(whose name is not available).
CAA also learned when Pastor CHEN Tongqing’s wife and son went to the detention center to look for pastor CHEN, both of them were beaten by the prison police and Chen’s son was forced to go back home handing in his dad’s bibles and other Christian literature. The police confiscated these books.
In Sichuan province, at 2pm on July 6th, two House Church leaders from Chongqing city pastor DAN Wei and his wife XIAO Tianmin were arrested and imprisoned by 4 members of PSB of Langzhong City with 2 village officials while they were leading a Bible study at a host family at Beiguan Town, Langzhong City, Sichuan province. Both of them were accused as “evil cult ” leaders.
“The international community should be aware of the recent escalating campaign against evangelical house churches by the Chinese government in the name of clampdown against the controversial Three-Grade Servant group,” said Rev. Bob Fu of CAA, “We urge President Bush and other administration officials to speak up more forcefully on the deteriorating situation of religious persecution in China.” CAA urges the Chinese government to immediately release these arrested pastors.
Communicate your concern to the Chinese authority at the following address:
Ambassador Zhou Wenzhong,
Embassy of the People’s Republic of China
2300 Connecticut Ave NW, Washington DC 20008http://www.china-embassy.org/
TEL: 202-7456743
Fax: 202- 588-0032 ; 202-7457473
Director of Religious Affairs: (202) 328-2512
Premier Wen Jiabao, PRC
PO Box 1741, The State Council, Beijing, PRC (zip code 100017)
Contact Phone?+86-10-66012399
Ms. Wu Aiying, minister of Ministry of Justice of PRC
Tel: +86-10-65205114
Fax: +86-10-64729863
Address?No. 10, Nan Da Jie, Chaoyangmen, Beijing City (Zip Code: 100020)
Issued by CAA on July 14, 2006.