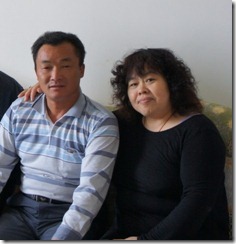 (Kurla, Xinjiang–March 22, 2013) Recently, a house church in Qimo County, Kurla City of Xinjiang was raided and persecuted. Sister Xu, who lives in the residence where people gathered, was detained. Brother Shen, the house church leader, suffered a heart-disease episode triggered by police interrogation. A sister who also led the house church was forced to flee the area to evade the authorities.

(Photo) Sister Xu of the household that accommodated the gathering.

At about 4 p.m. on Friday, March 15, 2013, members of a house church in Qimo County began to gather at the residence of Sister Xu. By and by, a total of 14 Christians came to the house and began to sing hymns. At about 4:30 p.m., they began to pray. While two people were praying, they heard the sound of knocks on the door. When they discovered that the people outside the door were from the Public Security Bureau and there was a group of 21 of them, they did not open the door. The police remained for about one and a half hours. When the believers saw that the police had left, the believers left the scene quickly.

At about 8: 30 p.m. on the same day, the police officers (including armed police) again went to the residence of Sister Xu. This time they were equipped with guns and electric batons. They yelled and shouted but did not show their search warrant. At the time, Sister Xu was alone at home and the police officers searched everywhere in the rooms and turned everything there upside down. They confiscated the Christian calendars, hymnals, Bibles, speakers and some items not related to Christianity. They put these confiscated items on the floor and took photos of them. Then, they took away a desktop computer tower and a notebook computer, saying that they would check them.

While they were searching the house, Sister Xu’s husband and son came back home and they were all detained. First the police took photos, made fingerprints and footprints and took blood samples from them at the residence. Then, the police took these members of the Xu family to the local police station. After they made the written records, the son was proven to have nothing to do with the incident and was released at 3 a.m. Sister Xu’s husband was also released on the afternoon of the next day (after claiming he was not a Christian). Meanwhile, Sister Xu was held at the detention center, and the police said they would release her after 15 days.

At 6 p.m. on March 18, one of the persons in charge of the house church in Qimo County—Brother Shen, was summoned to the local police station for interrogation. Under interrogation he suffered a relapse of a heart disease condition, and his family was notified; family members picked him up at 9 p.m. the same day. The police made his family guarantee that there was nothing seriously wrong with his health. Then, the local police station discovered another person, Sister Cao, was also a leader of the house church, and sought her. Sister Cao anticipated that she would be summoned, so she turned off her cell phone and left her home for a construction site relatively far away to avoid the authorities for the time-being.

Sister Xu’s husband returned to tell us that during the time the written records were made, the police took information from the computer and there it was written that “Sister Cao and Brother Shen were (so-called) cultists—Ji Sanbao. There was a photo.” He said, it is determined to be a cult and he didn’t know what to do with it. [Editor’s note: The Christian heresy ‘Society of Disciples’ founded by Ji Sanbao in Yao County, Shanxi Province, also known as ‘Three Redemptions’ or ‘Two Ounces of Grain,’ has been branded by the communist government to be heretical.]

ChinaAid will continue to pay attention to this case.