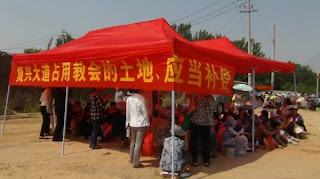 A Three-Self Church’s Land Occupied for 40 years; and Six Churches United to Defend Their Rights

On the morning of June 13, 2013, Kaifeng Christian Church called together 700 pastors and coworkers represented from six different churches. They convened on the north side of the Kaifeng Yellow River Water Conservancy Technical Institute near the construction site of Fuxing Avenue. There, they organized a protest to stop the local authorities’ occupation of their land. According to Kaifeng Christian Church, a state-owned forestry farm has occupied their 200,000 square meters land since forty some years ago. A state-operated Technical Institute has been occupying a portion of this land for 10 years, and still, a portion of their land has been sliced off for municipal road construction use. Kaifeng Church’s demonstration is intended to draw the government’s attention to the crimes committed by the local authorities and call for the return of the occupied land.

A Chronicle of the Occupied Land

1927 – 1933: The Chinese Episcopal Church purchased 205,792 square meters of land in the western suburbs of Gumen Village of Kaifeng City.

Spring of 1950: The purchased land was used by the local garrison command for land reclamation purpose.

December 1950: In accordance with the “Regulations on Religious Affairs”, which states that Christian and Catholic organizations must register with the government, the government of Kaifeng City registered the real estate properties purchased by the foreign church as Kaifeng Christian Church’s properties.

1963: The registered property was entirely occupied and put to use by the then newly established state-owned forestry farm.

1982: Approved by the vice mayor, 450 acres of the church’s land was given to the stock seed farm.

In August 1995, the municipal forestry farm applied for the “Certificate of Forest and Woodland Tenure Right” of a 297,428 squares meters land, which allows them to legally possess and use the land they took from the church and the two portions of land situated respectively at Nanguan and Sunlitang villages, which were originally purchased by the municipal livestock farm.

2003: Despite the controversy about the land, the forestry farm sold 26,758.5 square meters of land to the Kaifeng Yellow River Water Conservancy Technical Institute.

2004: The local Three-Self Christian Council called for the return of the 205,792 square meters of land. In order to properly resolve this dispute about the inherited land, the council members made trips to Beijing to seek policy advice from the State Administration for Religious Affairs, the State Council Legislative Affairs Office, and the Ministry of Land and Resources. On May 2004, the office of land and resources in Kaifeng submitted to the local government the (2004) No. 48 proposal concerning the resolution of the land ownership dispute between the local Three-Self Christian Council and the city forestry farm.

First: In December of 1950, the financial department of the municipal government, in accordance with the relevant regulations of the State Department, registered the land as the Kaifeng Church’s property. Historically, the government did not confiscate the land nor had they have issued any legal document stating their intention to expropriate the land. Although approved by the municipal government, the forestry’s use of the land in 1963 is still regarded as a form of occupying the church’s land. The municipal forestry farm’s application of No. 000048 of the “Certificate of State-owned Forest and Woodland Tenure Right” violated the relevant regulations of the province and city, and it should be revoked.

Second: The municipal forestry farm and the stock seed farm assumed that the policy concerning the implementation of church properties does not apply to land, and their assumptions lack legal and policy support. On the ground of honoring the principles of respecting history, benefiting both parties, and contributing to stable development, in accordance with the “Law on Land Management of China” Article 16 Paragraph 2 and the former state bureau of land management’s “A Number of Provisions to Determine the Ownership and the Use of the Land” Article 30, and incorporating the General Office of the State Department (1980) No. 188 and the government of Henan Province (1985) No. 3 and the relevant policies concerning the church properties, the municipal government decides:

1. The land over which the municipal forestry form and Kaifeng Christian church dispute has only 99248.5 square meters left, and each party has the right to own 49,624 square meters of land (See the attached map for detail).

3. Since the land was sold to the Yellow River Water Conservancy Technical Institute by the municipal forestry farm in the amount of $2,050,715, the former municipal stock seed farm and Kaifeng Three-Self Christian Council each will be given $1,025,357.

The Government’s Decision Has Not Yet Been Executed

At that time, the church, after taking everything into account, expressed obedience. But in order to make their voice heard, the Kaifeng TSPM and Three-Self Christian Council visited the complaints Bureau 13 times. The resolution decision has been supported by officials like Guangxun Ding, the vice chairman of the CPPCC National Committee, Maosheng Niu, the director of Ethnic and Religious Affairs Commission, Guangxu Xu, the then secretary of the party committee of Henan province, and Chengyu Li, the governor of Henan province. According to secretary Xu and governor Li’s instruction, the party committee of Henan province and the government of Henan province sent out an investigation team. After thorough investigation, they maintain, “The resolution decision of Kaifeng government is consistent with the communist party’s religious policies and land management regulations. They not only implemented the religious policies and defended the religious legal rights, but also sustained the forestry and stock seed farms’ production and their employees’ lives…”

But because of human causes, the decision has not yet been carried out.

The Church’s Properties Continue to be Occupied. In 2013, Six Local Churches United to Defend Their Rights

On April 20, 2013, the construction project of Fuxing Boulevard began. The road construction used 4,600 square meters of land, but the church has not yet received the appropriate compensation. With regards to this land abuse, 130,000 Christians in Kaifeng expressed their resentment.

Then, on June 13, 2013, brothers and sisters from various churches in Kaifeng, in the intense heat of the sun, set up tents for demonstration use. On that day, pastors, seminarians, church volunteers, ministers, and church elders gathered at the construction site to protest against the local authorities’ abuse of the church’s property. There were 700 people in total. 85-year old Anwei Wang, the chairman of The China Christian Council (CCC) in Kaifeng & National Committee of Three-Self Patriotic Movement of the Protestant Church in Kaifeng, was also among them.