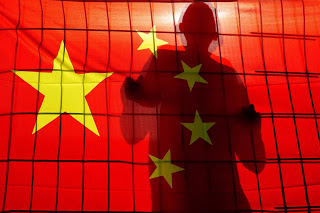 (ChinaAid Association—Nov. 23, 2020) In his forthcoming book, The Prisons Made in China, Abduweli Ayup challenges the claim by the Chinese Consulate in New York that vocational education and training centers in Xinjiang battle terrorism and have nothing to do with “human rights, religion or ethnicity.” The consulate claimed that allegations the Chinese Communist Party (CCP) had detained a million Uighurs in the region a “groundless lie.” According to the consulate, China’s programs replicate those compulsory programs the U.S. and United Kingdom use for terrorist criminals.

Xinjiang has set up vocational education and training centers in order to root out extreme thoughts, enhance the rule of law awareness through education, improve vocational skills and create employment opportunities for them, so that those affected by extreme and violent ideas can return to society as soon as possible. Trainees have freedom of movement.

Contrary to the New York Chinese Consulate’s claim, The New York Post reports that during the past few years, China secretly built prisons and internment camps to complement its current mass detention campaign against Muslim minorities. The 260 high-security camps China has built since 2017 have the capacity to hold tens of thousands of people and indicate a shift from the CCP using public buildings and schools for makeshift detention centers to using these new facilities as permanent prisons for “terrorists.”

Nevertheless, Abduweli, a former detainee in one of the CCP’s camps in Xinjiang, later exiled, said the people in the concentration camps are “peaceful people. They are businessmen and scholars and engineers. They are our musicians. They are doctors. They are shopkeepers, restaurant owners, teachers who used Uyghur textbooks.”

Mr. Ayup and other exiled Uyghur poets who have seen their families torn apart back in their homeland use their poems to share the deep, overwhelming sadness currently enveloping the Uyghur community. Abdushükür Muhemet, a Uyghur poet born in Kona Sheher in Kucha County, published more than 350 poems in some of the leading Uyghur-language literary journals before moving to Sweden in 2004. Muhemet initially learned that authorities had imprisoned his brother to a Xinjiang “re-education” internment camp in March 2017. He said:

Since then, I lost contact with my family. Although I’m physically here in Sweden, my mind is always with them back at home. Sometimes I feel like my whole body is burning with longing. I miss my country, my relatives, my friends, and the hometown where I grew up.

Regarding his poem “Night” (featured below), that he wrote several months after the CCP’s enforced disappearance of his brother, Muhemet said, “For hundreds of years we have been waiting for the dawn, which is a symbol for liberty and freedom, but the dawn is not here yet. We were young once, with a full head of hair. There was night then, and still is now. It is still the same, although our hair, on the other hand, has thinned.” 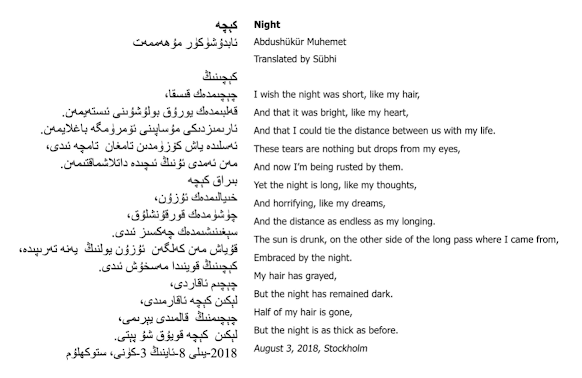 Although Abuweli uses figurative words in his poems, he uses plain, raw words to recount that during his time in prison, the CCP manipulated ties between language and power as part of their abuse. He explains that the guards would ask Uyghurs a question in Mandarin and told to reply in Uyghur. Then they switch the request around. “Every time we answered in the wrong language,”Abuweli said, “guards beat us.”

Now living in the Norwegian town of Bergen, Abuweli teaches small classes of Uyghur children their mother tongue. CCP authorities consider teaching this lesson in China “a dangerous political act.” In China, in response to the Uyghur minority expressing their culture, CCP authorities have detained more than a million people in re-education camps. For his work establishing a series of Uyghur-language schools in China, Abduweli spent two years as a prisoner of conscience. He escaped to Europe after his release in 2015.

His younger sister, however, remains in one of Xinjiang’s camps.

As detainees like Abuweli’s younger sister in vocational education and training centers have never been formally charged or arrested for a crime, the Chinese government does not include the internment camps as part of the criminal justice system.

Nor have detainees like Abuweli’s younger sister been given a chance to defend themselves in court. Thus, Abuweli considers the words he writes in poetry and prose as a way to stand up for his sister.

“How else can I fight for her?” he asks.