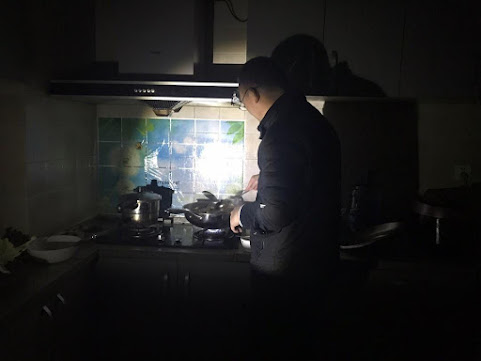 (Chengdu, Sichuan Province—December 21, 2020) On December 19, two years and 10 days following the Chinese Communist Party’s (CCP’s) crackdown on Early Rain Church (ERCC), state security officers again seized Minister Wu, the current pastor of the church, asking him if he plans to imitate Pastor Wang Yi and Elder Qin Defu, currently serving prison sentences for their Christian beliefs. During the CCP’s raid on ERCC in 2018, as police raided the church as well as homes of church members, they confiscated church property and arrested more than 100 people who attended the church.

CCP’s persecution of ERCC continues with Minister Wu’s family being forced to move several times and their electricity currently cut off. Nevertheless, Minister Wu, back at home with his family, plans to celebrate Christmas—in the dark.

Typically, at dusk each day, Ms. Xiong, Minister Wu’s wife, lights candles and tutors two children.* As their guest, I noted that Minister Wu wearing glasses, appeared confident as he cooked dinner for his family and me. Holding a flashlight in one hand while skillfully operating the wok and spatula with the other, he smiled. “The power outage has been going on for a long while,” he said. “We are used to living in the dark.”

As I watched Minister Wu prepare our meal, Ms. Xiong walked into the kitchen with a smile, “We don’t have light now, but we have Jesus’ light in our hearts.”

Although state security officers harass Minister Wu, who previously worked as an executive for a foreign enterprise, and now serves as the full-time minister of ERCC, he as Ms. Xiong repeatedly “Thank God.”

Pastor Bob Fu, ChinaAid founder, said: “Be encouraged. Even though the CCP cut off the electricity at the home of Early Rain Church’s minister Wu, he, his wife, and children still smile.”

Even in the dark, Minister Wu, his wife, and children smile because they know the real meaning of Christmas, that Jesus Christ, the light of the world—has come. As Ms. Xiong said, even though they “don’t have light now,” they have Jesus’ light in their hearts.

*They have raised three additional children.

###
Then Jesus spoke to them again, saying,
“I am the light of the world.
He who follows Me shall not walk in darkness,
but have the light of life.”
~ John 8:12
China Aid exposes abuses in order to stand in solidarity with the persecuted and promote religious freedom, human rights, and rule of law. If you wish to partner with us in helping those persecuted by the Chinese government, please click the button below to make a charitable donation.