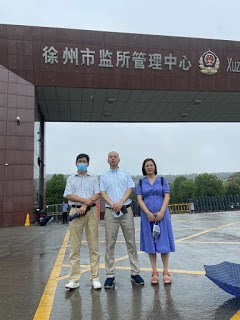 (Xuzhou, Jiangsu Province—October 20, 2020) Qilei Lin, an attorney for Wensheng Yu, a human rights lawyer, recently met with Yu in Xuzhou City Detention Center to discuss his second trial’s defense. At this time, according to Lin, Yu appears to be in bad health.

Attorney Lin published on Twitter: “After being jailed for more than two years, Yu suffers with severe malnutrition. As prison officials have also deprived Yu from access to sunlight, this has adversely affected his immune system. …Yu has been coughing for more than 20 days.”

Due to one tooth on the upper right side of his mouth falling out and several teeth on the left side becoming loose, Yu cannot chew on food. Although he has requested treatment several times, the officiating guard rejected his appeals, citing the reason as “insufficient medical care resources.”

Repeated sessions of the “sit-still,” an undocumented torture method in China’s prison, have caused Yu’s body to stiffen. Prison guards order prisoners with a history of abuse to force another prisoner to sit still on the floor, keeping his upper body taunt, straight, and upright for extended periods of time. If the tortured prisoner moves his body any, officers will extend the “sit-still” time for punishment. A prisoner’s spine typically stiffens after suffering this torture tactic.

When Yu refused to engage in more “sit-still” torture, the prison guard forfeited his right to read books. Lin and Yu’s family have submitted written request to guarantee Yu’s legal rights by to receive dental treatment and read books.

In the past, Yu delegated several major cases to defend other human rights activists and lawyers. He has also participated in a campaign against Chinese government’s dereliction of duty in air pollution regulation. Consequently, Chinese authorities suspended his license to practice law.

In January 2018, Yu developed “A proposal to amend the Constitution,” considered the primary reason for his arrest. CCP authorities arrested him January 19, 2018, while sending his child to school, and on the following day, criminally detained hum under the charge of “obstruction of law enforcement.”

On January 27 2018, Xuzhou city police officers charged Yu with “inciting subversion of state power” and placed him under home confinement. On April 19, 2018, Xuzhou city Procuratorate arrested him under the charge of “inciting subversion of state power” and “obstruction of law enforcement.” After court officials extended Yu’s trial date six times, they tried him in a secret trail in Xuzhou city intermediate court on May 9. 2019.

On June 17 2020, the court sentenced Yu to four years imprisonment with “deprivation of political right” for three years, under the charge of “inciting subversion of state power.”

On August 13, 2020, four UN special rapporteurs [sic: appointed by UN to report on its meetings’ procedures]. and two working groups sent a letter, published online, to the Chinese government regarding Yu’s case. This UN working group considers Yu’s arrest “arbitrary.” To this point, CCP officials have failed to respond to the UN’s letter.

Yan Xu continues to fight for her Yu, her husband, traveling to Xuzhou city several times trying to negotiate with the court and the prison. She has also met with diplomats from several countries to appeal for the international community’s attention to Yu’s case. During this trying time, government authorities have monitored, harassed, threatened, and placed Xu under home confinement.

Three to five minutes after my husband and our son left home together, our son came home by himself. ”Dad has been arrested by police,” he said.
“What happened?” I asked.

A SWAT (Special Weapons And Tactics) car, two regular police cars and a bus are parked downstairs. More than ten police arrested Dad. I think it’s related to his letter.

Yu’s letter, “A proposal to amend the Constitution” addresses the fact that although China’s Constitution grants everyone the right to present proposal and freedom of speech, the CCP does not actually allow people to say those things. Thus, police arrested Yu.
China Aid exposes abuses in order to stand in solidarity with the persecuted and promote religious freedom, human rights, and rule of law. If you wish to partner with us in helping those persecuted by the Chinese government, please click the button below to make a charitable donation.