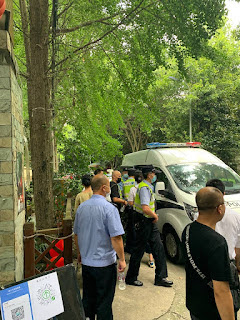 Yesterday morning, about 50-60 believers gathered at a tea house in Wuhou District, Chengdu, and attended an in-person Sunday service. 20-30 police officers in uniform and plain clothes raided the meeting. They announced that “Early Rain Covenant Church” had been shut down, and it was illegal for them to gather. Police locked the tea house door, requiring everyone to register their IDs before leaving.

Xing Hongwei (pen name, A Xin) was unwilling to cooperate with police during the raid, and they had a physical altercation. Officers pressed Xing Hongwei to the ground and took him away. The conflict did not escalate because Early Rain members intervened. Zhao Qing—Xing Hongwei’s wife— was taken away to Wuhou District Police Station as well. Police threatened her with criminal detention, saying that they could give her husband criminal detention depending on his attitude.

A Xin is a renowned Christian writer. He was sentenced to three years due to founding the “Party of Freedom and Democracy” after the Tiananmen Square massacre. He participated in the 1989 Tiananmen Square Protests and was one of many Christian converts who attended the demonstrations. Later, he focused on spreading the Christian faith by educating and writing books and articles. In addition, he attended educational events organized by Liren College.

He authored several books including Samuel Pollard’s Biography: Love China with Life and translated many classic Christian works. On February 25, 2019, police seized and detained A Xin for 10 days at his home because he posted on WeChat that Pastor Wang Yi’s mother was insulted and beaten by police. This May, A Xin was taken away by police because he interceded for Ukraine in the WeChat group he organized. National security officers questioned members of the group, and the WeChat group was forcibly dissolved.

Six Christians accompanied A Xin’s wife and daughter at Wuhou District Jitou Police Station, but police prohibited one of the believers, Li Xuewen, from entering. Li Xuewen moved from Changsha to Chengdu to pursue his faith and join Early Rain.

By noon, police left one after another, some believers left as well, and some believers had lunch near the police station. One believer on site said, “The vast majority of brothers and sisters were peaceful, quiet, and serene in their demeanor, knowing that God will be with us and that He will watch over and protect His children!”

That afternoon, A Xin was transferred to Jinhuaqiao Police Station, so several Christians of Early Rain followed and waited for updates. Zhao Qing returned home at midnight, but A Xin is still at the police station. Early Rain asked for the body of Christ to intercede for him.