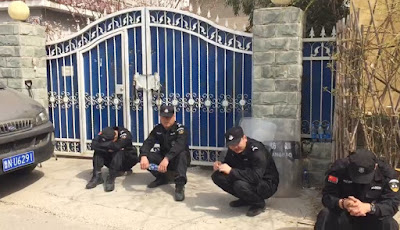 Additionally, Pastor Joseph Cui was held in a patrol car for half an hour, and one of the parents had to be hospitalized from injuries.

At the beginning of the raid, about 40 officials broke into the kindergarten and confiscated books, which the parents had just obtained, and desks. The parents asked the authorities who their superiors are, but they refused to answer.

This raid comes after a March 25th intrusion, when more than 20 government-backed men entered the kindergarten and threw away office supplies.

Due to months of government pressure to evict the church, which is located in the same building as the kindergarten, the landlord forced the elementary potion of the school to relocate and is now making the rest move out, even though the lease is not yet expired. Since the church spent almost 400,000 yuan ($63,424.00 USD) refurbishing the kindergarten, they asked the landlord to compensate them, but he refused, and they haven’t reached a consensus yet.

ChinaAid exposes abuses, such as those suffered by the members of Aijiabei Church, in order to stand in solidarity with persecuted Christians and promote religious freedom, human rights, and rule of law.