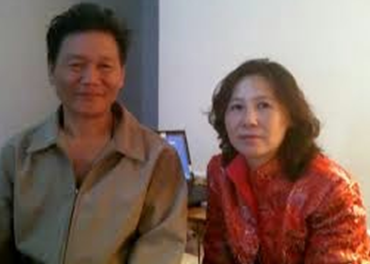 By Rachel Ritchie
(Beijing—Dec. 1, 2014) Beijing police placed Ni Yulan, a human rights lawyer who has been wrongly imprisoned by Beijing police multiple times, and her husband, Dong Jiqin, under house arrest during the Asia-Pacific Economic Cooperation (APEC) meetings, which were held in the country’s capital from Nov. 5-11. During that time, on Nov. 10, police entered the couple’s residence and began beating Dong, who was later hospitalized for his injuries.

Dong suffered multiples bruises to his chest as well as a broken rib when three plainclothes officers entered the couple’s rent home without provocation.

The couple’s troubles with the law began in April 2002, when Ni was detained by police from Xinjiekou, a town in Beijing’s Xicheng District, after she took pictures of the forced demolition of a neighbor’s home. Ni was placed under administrative detention for 75 days for “obstructing official business.” She was severely beaten during detention.

After Ni was released, she attempted to report her detention to the Standing Committee of the Beijing Municipal People’s Congress, but two police officers from the Xinjiekou Police Station named Liu Junjie and Yan Xiujian beat her to prevent her from filing the complaint. The beating left Ni with a broken tailbone, and she was detained once again. Formal charges were brought against her on Nov. 14, 2002. Ni was sentenced to one year in prison on Nov. 27, 2002, for “obstructing official business” and her law license was revoked.

When Ni was released on July 12, 2003, she continued to petition higher authorities in an effort to defend her rights. Police persecution continued when, on Oct. 15, 2003, she was taken to Xinjiekou Police Station by an officer named Li Nan and was “illegally detained” for three days, she said.

Five years later, in November 2008, officials forcibly demolished Ni and Dong’s home. During the demolition, Ni was involved in an altercation with police and was placed under criminal detention and tortured. On Dec. 18, 2008, the Xicheng District branch of the Beijing Municipal People’s Court sentenced Ni to two years in prison for “obstructing official business.” She was released in April 2010.

During her detention in 2008, authorities denied her medical treatment for injuries she sustained during beatings she received. As a result, she lost the ability to walk without crutches and is, at times, confined to a wheelchair.

Following the demolition of their home, at times, Ni and Dong were forced to live on the streets or in tents in parks because local authorities frequently pressure the couple’s landlords to evict them.

Ni has received support from the U.S., beginning in February 2011 with a visit from Jon M. Huntsman, Jr., who was serving as the U.S. Ambassador to China at the time. In April 2013, Gary Locke, who succeeded Huntsman, urged the Chinese government to release the couple from prison.

Ni was also awarded the Human Rights Tulip, an annual prize given by the Dutch ministry of Foreign Affairs, in 2011. The award was given in absentia due to Ni’s imprisonment and the Chinese authorities’ refusal to allow Ni’s daughter to leave China in order to accept the award for her mother.