Beijing Shouwang Church Announcement on Outdoor Worship Service on May 27, 2012 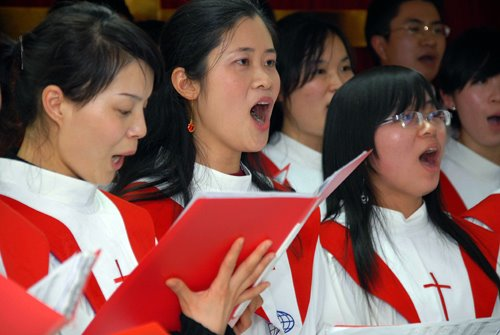 Peace in the Lord! On this past Sunday, we held the twenty-first outdoor worship service of this year. It was a hot day, and believers continued to worship our Lord Jesus Christ with faith and hope.

The same sister was once again taken away to be detained in a hotel on Friday, and was not released until Sunday morning. As far as we know, on Sunday morning, at least fourteen believers were taken away from locations near the platform for attending the outdoor service. Five believers were released on the way, directly sent home, or released right after they arrived at local police stations. Eight believers were sent to Zhongguancun Police Station in Haidian District, and were released around 14:00pm in the afternoon. One believer was sent to Guangying Police Station in Chaoyang District, and was released around 18:00pm.

We know that the old commandments of God are ever new; the content never changes, yet the way to carry out might vary. Today, with Lord’s grace and mercy, believers has been marching forward with faith and hope till today as Shouwang Church is experiencing these things. We have seen the victory of God’s word in this generation during this process. And when we face temptations from the world, weakness of our flesh, and attacks and schemes from the enemies, we come to understand how precious promises in the Scripture are in a deeper way: “the world and its desire are passing away, but those who do the will of God live forever.” (1 John 2:17)