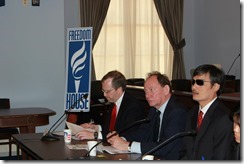 (Washington, D.C.–March 5, 2013) At a joint U.S.-European hearing coinciding with the opening of the annual meeting of the Chinese legislature in Beijing, blind human rights lawyer Chen Guangcheng called for a transatlantic pact to highlight human rights abuses in China.

Chen was one of the two featured speakers at the hearing on Capitol Hill on Tuesday morning. The other was Geng He, wife of imprisoned human rights lawyer and Christian Gao Zhisheng.

Chen also revealed that his nephew, who was imprisoned after Chen’s dramatic escape from house arrest, was tortured while being interrogated and was threatened by public security forces for attempting to appeal his incarceration.

“It is time to hold the Chinese government accountable for its broken promises,” Chen said. 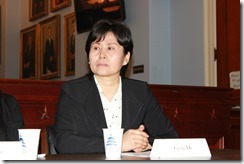 Geng (left) echoed Chen’s call for the need to speak out, referring to Martin Luther King’s famous quote, “In the end we will not remember the words of our enemies but the silence of our friends,” she said, “I hope at this critical juncture, the list of friends who are silent does not include President Obama or Secretary of State Kerry.” (See the full text of her remarks at: https://chinaaid.org/2013/03/geng-he-speak-on-hill-for-her-husband.html)

The hearing was organized by ChinaAid and Freedom House, and coincided with the opening of the National People’s Congress, where Communist Party leader Xi Jinping is to assume full power as President and head of the Central Military Commission.

Freedom House president David Kramer, former assistant secretary of state, opened the event with comments emphasizing the global importance of the advance of freedom in China. 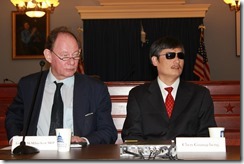 “As President Obama completes his team for the second term, his understandable focus on the rise of China needs to be tougher on human rights and reform in the world’s biggest country, and its largest tyranny. The European Parliament welcomes a pact with Congress to take this forward,” said McMillan-Scott (photo at right).

ChinaAid founder and president Bob Fu said, “We are glad to see the formation of an EU-US transatlantic freedom alliance for China.  A free and democratic China is in the best interests of my fellow Chinese people and is also the best guarantee of global security of our future generations in the free world.”