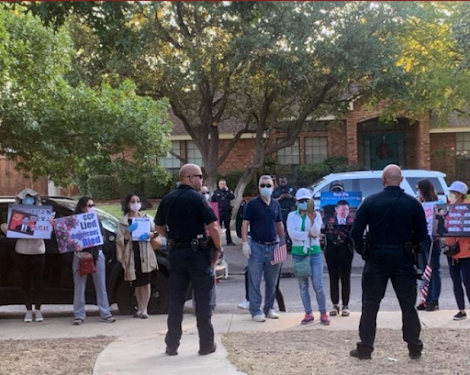 Bob Fu recounts the “very real” issue of freedom from an undisclosed location and confirms: “The Chinese Communist Party hates me and China Aid for our freedom work.”

(ChinaAid Association —Nov. 18, 2020) During an interview with William McKenzie, Bush Institute Senior Editorial Advisor, Bob Fu, PhD, founder, and president of ChinaAid, shares how his current situation has affected him, his family, and his ongoing work for freedom through ChinaAid.

As Dr. Fu recounts the “very real” issue of freedom from an undisclosed location, he confirms: “The Chinese Communist Party hates me and China Aid for our freedom work.”

Highlights from Dr. Fu’s conversation with McKenzie include:

McKenzie: Nonprofit organization China Aid supports rule of law, religious freedom, and human rights. Bob Fu, its founder, has in turn drawn the ire of the Chinese government and its supporters — resulting in threats serious enough that he and his family have been forced from their home in Midland, Texas.
McKenzie: How is your family dealing with the protests in front of your home? And what is this about?
Dr. Fu: We are holding together by the grace of the Lord. Our family is experiencing real trauma and our children are scared. This morning, for example, we had another bomb threat from a chat site. This group has made Midland, Texas, their national focus. This is a surreal situation.
This all started on September 26, while I was speaking in D.C. at a national prayer rally. The protesters came to our house, holding up New Federation of China flags, distributing flyers on our street, and chanting slogans that I am a fake pastor, a human smuggler, and a spy for the Chinese Communist Party.
McKenzie: Can you explain who is behind this?
Dr. Fu: Yes, Guo Wengei, a Chinese billionaire in New York. These are his diehard followers. They want nothing but to destroy. And this is a national campaign.
They also have targeted Wu Jianmin, a democracy activist in Los Angeles who participated in Tiananmen Square. And they have gone after other prominent dissidents in Virginia, New York, Australia, Japan, New Zealand, Taiwan and other places.
He told his followers to go and kill enemies in this global campaign. These protesters reportedly have been promised $500 a day for protesting and a bonus of $100 a day for more aggressive actions. And not just here, but elsewhere too.
Dr. Fu: China Aid has documented how more than 10,000 churches in Henan province were banned. Two-thirds of all government-sanctioned churches have been totally shut down. And house churches have been dismantled and banned. This is the start of the new Cultural Revolution.
…The Chinese Communist Party, led by Xi Jinping, is trying to build a country modeled after North Korea. This will only get worse.
McKenzie: Fu also discussed the plight of religious freedom in China, which his organization promotes along with the rule of law and protection of human rights. The most extreme case of persecution involves Uighur Muslims, whom Fu describes as suffering massive human rights violations.

Dr. Fu ends his conversation with McKenzie with “an encouraging note” which reflects how he continues to work through ChinaAid for freedom—”holding together by the grace of the Lord.”