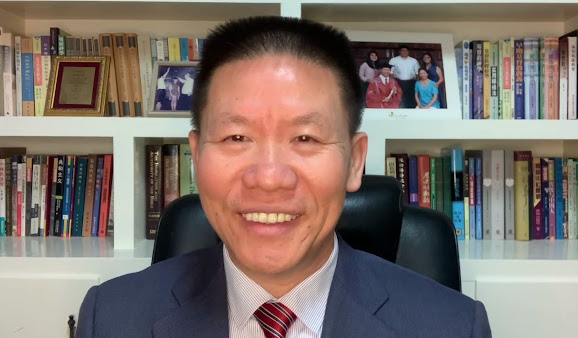 Bob Fu back at home in ChinaAid office.
(Photo: ChinaAid)

(ChinaAid, Midland, Texas—Dec. 15, 2020) After being in protective custody, exiled from his home and office in Midland, Texas for almost two months, Pastor Bob Fu, founder of ChinaAid, recounts ways the Lord’s work has continued. Despite the Chinese Communist Party backing threatening mobs that surrounded his house; despite the pandemic, and despite spiritual attacks on him and his family, “The Lord has won this victory.” Pastor Fu reports with a smile: “We are back—peacefully and safe.”

Without the prayers and support from those who partner with ChinaAid, Pastor Fu stresses, the work the Lord has entrusted to us, exposing abuses and walking with—serving the persecuted church—could not have continued.

During this Christmas season, we celebrate God’s gift to the world, Jesus Christ, and Jesus’ ultimate gift, paying the price for our sins with His death on the cross. Pastor Fu encourages those who will, “please continue to prayerfully support Brothers and Sisters in China facing increasing persecution for the name of Jesus.”

As they remember those being persecuted in China, Pastor Fu says, Christian Brothers and Sisters also need to stand strong against the evil tactics the CCP uses to erode religious freedom in other places throughout the world, including America. “Let’s not be discouraged,” Pastor Fu says. “No matter what weapon the enemy uses to attack, in His abundant grace, the Lord guarantees His victory. Just as His work has never stopped, it will continue just as God has promised—for eternity.”

In this video, Pastor Fu shares an update at his ChinaAid office.
(Photo: ChinaAid)
###
And I heard, as it were,
the voice of a great multitude,
as the sound of many waters and
as the sound of mighty thunderings, saying,
“Alleluia!”
For the Lord God Omnipotent reigns!
~ Revelation 19:6
China Aid exposes abuses in order to stand in solidarity with the persecuted and promote religious freedom, human rights, and rule of law. If you wish to partner with us in helping those persecuted by the Chinese government, please click the button below to make a charitable donation.