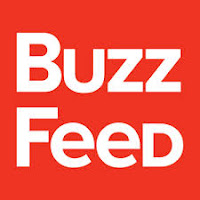 “If prices have to be paid, such as my life, I want to fight for a civilized China for my offspring’s future,” one lawyer told BuzzFeed News.

The 16-year-old is now under 24-hour police surveillance at his grandmother’s in northern China’s autonomous region of Inner Mongolia, according to the Associated Press.

It has been more than three months since the teen was stopped at Beijing International Airport en route to attend high school in Australia and forced to remain in the country. It was then that his parents — Wang Yu and Bao Longjun — were arrested in the midst of a widespread crackdown on lawyers in China. Wang and her husband, both of whom are lawyers, have remained in detention and incommunicado for charges including endangering national security. Bao’s passport is said to have been taken away.

Two activist friends of Bao’s parents reportedly shepherded the boy across the border into Burma. The party was discovered in Mong La, a Burmese town bordering China, where both adults were reportedly arrested by Chinese police, according to Radio Free Asia.

“Bao Zhuoxuan didn’t have any criminal record, yet as a minor his personal freedom is restricted,” said Yu Wensheng, a human rights lawyer, in a telephone interview conducted in Chinese with BuzzFeed News. “This is anti-human,” Yu added. 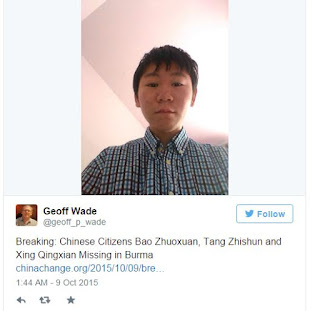 On Monday night, Yu and 55 other Chinese human rights lawyers released an urgent statement in which they expressed solidarity over Bao and the activists’ disappearance. Their declaration has so far been viewed by over 30,000 Weibo users.

“The police of China have followed, surveilled, and restricted the freedom of Bao Zhuoxuan. This not only violates international law — as well as China’s own provisions in the ‘Law on the Protection of Minors’ — but also involves the crime of abuse of power,” the statement reads.

Within 24 hours of the statement’s release, at least 25 more lawyers signed on, despite the possible risk to their personal safety. Forty of the 81 lawyers who signed the statement were targets of the crackdown in July and August. (China’s state-run People’s Daily referred to the lawyers as “a major criminal gang” at the time.)

But the more they experience crackdowns, the less fear they have, Yu said. “Next time I’m to be forced into a letter of guaranty, a video confession, a criminal charge, or torture, hunger, I wouldn’t be as weak as last time,” he told BuzzFeed News. Yu said that he was jailed for 99 days last year for supporting the Umbrella Movement — a student-led protest movement in Hong Kong, pushing for the island’s leader to be chosen through direct elections — and shared his cell with “prisoners that were sentenced to death.” 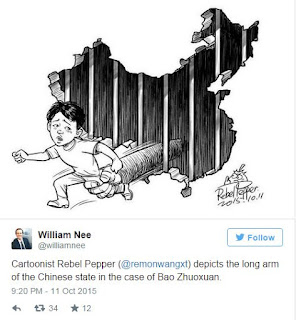 Activists suspect that Bao might be used as leverage against his parents. Yu wasn’t so sure that strategy would work: “I missed my wife and my child a lot too when I was confined. But facing a crackdown from the authorities, we might have to endure the pain.” Yu was taken from his home three times in July and August; the last time he was handcuffed in front of his child.

“I’m guilty, I want to spend more time with my child. But if prices have to be paid, such as my life, I want to fight for a civilized China for my offspring’s future,” Yu said, speaking over the phone from Beijing, fully aware that he was highly possibly under wiretapping.

So far, the Chinese government hasn’t commented on Bao’s voyage, with a foreign ministry spokesperson saying that they were “not aware of the situation.”

Beimeng Fu contributed to the reporting of this story.