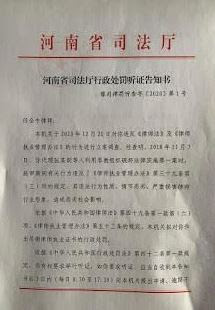 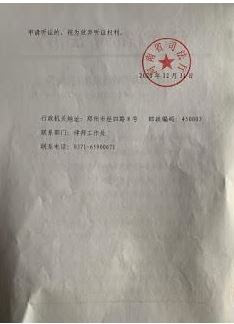 (Henan Province; Sichuan Province—Jan. 06, 2021) On January 4, Attorney Ren Quanniu received a notice from Chinese Communist Party (CCP) officials, employed by Henan’s department of justice, informing him that the government had revoked his license to practice law in China. Lawyer Ren believes this ruling relates to the cases of “12 Hong Kongers,” and imprisoned “Shanghai Lawyer Zhang Zhan.”

Also, on January 4, Attorney Lu Siwei, another Chinese human rights lawyer, hired alongside lawyer Attorney Ren to represent the 12 Hong Kong activists, received a notice of his disbarment from CCP officials employed by the department of justice in Sichuan Province. 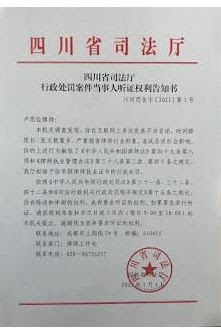 Notice from the Department of Justice in Sichuan Province to Lawyer Lu Siwei.
(Photo: ChinaAid)

On Dec. 4, the justice department of Sichuan Province in southwestern China issued a notice, accusing Lu of “making inappropriate remarks online multiple times.” Moreover, it said Lu’s remarks had “severely damaged the image of the lawyer sector” and had “negative impacts on society.” As a result, the department said it was entitled to revoke his license in accordance with local laws. …

A notice, dated Dec. 31 and issued by the justice department of Henan Province, leveled accusations against Ren for his actions during the trial of a client surnamed Zhang held on Nov. 7, 2018. Ren was also given three days to decide if he wanted a hearing to appeal the license revocation.

A Hong Kong-based concern group for the 12 Hongkongers condemned the Chinese regime’s decision to revoke the lawyers’ licenses.
“The Chinese authorities are using the case of Lu and Ren as an example to threaten other human rights lawyers, such that no one else would dare to participate in politically sensitive cases,” the group said in a statement on Facebook. …

Beijing and the Hong Kong government have drawn international criticism over their handling of the 12 Hongkongers case.

In response to authorities’ treatment of Lu and Ren, Hong Kong-based nonprofit China Human Rights Lawyers Concern Group warned that it could foretell an alarming development in China.

[The] Chinese government has now resorted to a subtler form of repression, administrative penalty, which involves revocation or invalidation of lawyers’ legal practice licenses, thus depriving them of their right to practice law,” the nonprofit wrote.

###
The wicked flee when no one pursues,
But the righteous are bold as a lion.
~ Proverbs 28:1