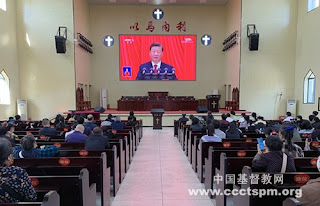 Photo from the official website of China Christian Council

(China—October 27, 2022) The Chinese Communist Party required state-sanctioned Christian organizations like the Committee of the Three-Self Patriotic Movement, their churches, and their seminaries across the country to organize believers and staff to watch the opening ceremony of the 20th National People’s Congress online.

According to the comprehensive report on www.ccctspm.org on October 17, the Committee of the Three-Self Patriotic Movement of the Protestant Churches and the Christian Council in Beijing, Jilin Province, Guangdong Province, Jiangxi Province, etc. were required to watch the live opening ceremony of the 20th National People’s Congress in different ways. Churches were ultimately responsible for organizing staff and believers to not violate COVID restrictions.

Meanwhile, the flagship seminary in China—Nanjing Union Theological Seminary— and other seminaries including Guangdong Union Seminary, Jinlin Province Bible School, Jiangxi Bible School, Northeastern Seminary, Central South Seminary, Heilongjiang Seminary, etc. were all required to organize all students, staff, and faculty to watch the live opening ceremony of the Congress and sing the national anthem of the PRC during the Congress.

According to other reports, Jilin Province Bible School expressed their loyalty to the CCP by sticking to the guidance of core socialist values advocated by the authorities and training religious staff by the standard that they should “be reliable politically, talented religiously, outperform others virtuously, and play a role at a critical moment.”

Christianity Sinicization is a political campaign, and it is not an effort to localize the religion theologically or evangelically.

Dr. Fenggang Yang, a sociology professor at Purdue University, said in with BBC in 2014 that Sinicized Christianity should fit with the Chinese culture: “But this culture is not true culture, but politics in the name of culture, and Christianity must do the bidding of political parties in harmony, and that is the key.”