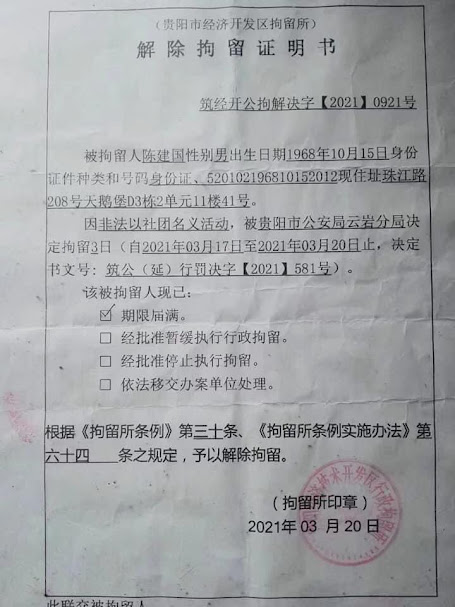 Chen Jianguo regarding his detention/retreat: “If God wills, I hope that I get to experience this type retreat again.”

Chen Jianguo’s certificate of release from detention.
(Photo: ChinaAid resource)
(Guiyang, Guizhou Province—March 25, 2021) On March 22, 2021, Chen Jianguo, a Christian attending Guiyang Ren’ai Reformed Church, posted details of his detention evolving from attending the “retreat” that a church on WeChat organized. The previous week, on the morning of March 16, Brother Chen with approximately 19 other Christians from Ren’ai Reformed Church gathered in Room 1702 of Yuli Plaza Wing B, located at 26 Zhonghua North Road, Yunyan District, Guiyang City, to begin their three-day retreat.*

At 9 am, Brother Chen had just finished reading Philippians 1:12-18 to the others: “I want you to know, brothers, that what has happened to me has really served to advance the gospel, so that it has become known throughout the whole imperial guard and to all the rest that my imprisonment is for Christ. And most of the brothers, having become confident in the Lord by my imprisonment, are much more bold to speak the word without fear.” While Brother Chen prayed, however, Bureau of Ethnic and Religious Affairs personnel, state security and police officers with several people from the community and sub district abruptly entered the room. Officers not only disrupted the prayer, they condemned those gathering for holding “an illegal rally.”

Police recorded each person’s ID and their interrogations. They also examined the retreat attendees’ cell phones.

Later about 1 pm, authorities permitted most Christians from Guiyang to gather their personal belongings and leave, but retained 10 Christians, including Chen Jianguo, Li Jinzhi, Li Lin and seven others attending the event and transported them to Yan’an Middle Road Police Station. That evening, around 11pm, authorities cuffed the hands of Elder Zhang Chunlei, Chen Jianguo, Li Jinzhi, and Li Lin behind their backs and transferred them to Guiyang City Economic Development Zone Police Station. They gave Elder Zhang Chunlei a 14-day administrative detention, and Chen Jianguo, Li Jinzhi, and Li Lin each a 3-day detention on a charge of “illegally hosting events under the name of an organization.” 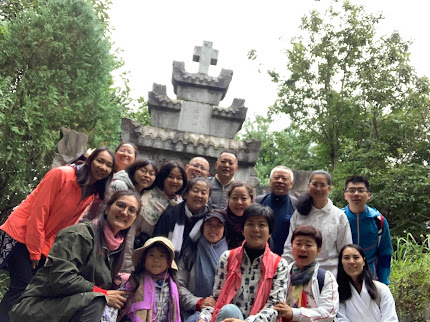 Believers of Guiyang Ren’ai Reformed Church.
(Photo: China Aid Resource)
Brother Chen later reported that no severe clash or violence occurred during the siege as Christians obeyed directives. He stated that in general, law enforcement officials appeared professional and stable except during the last part of the experience when some officers appeared frustrated because they did not understand our rationale for having a retreat.

On March 20, Brother Chen and the two other detained Christians from the retreat completed serving their 3-days detention and received the “certificate of release from detention” that the detention center issued. Brother Chen thanks Christian brothers and sisters for their prayer intercession.

Thank God and praise the Lord. He used his mighty power to enable me to complete the “retreat” using some related departments.

If God wills, I hope that I get to experience this type retreat again. May all glory and praise be to our Heavenly Father. Amen…

*For this retreat, these Christians had selected a quiet, peaceful place to center on building their bodies, hearts and souls in their faith. Similar to times recorded in the four gospels when Jesus stayed away from crowds of people (alone or with disciples) to focus on God, those attending the retreat planned to prayerfully focus on their relationships with God. They also were to confront the clash between secular views/objects to the world views the Bible teaches.

###
I do not pray that You should take them out of the world,
but that You should keep them from the evil one.
They are not of the world, just as I am not of the world.
Sanctify them by Your truth.
Your word is truth.
~  John 17:15-17 (NKJV)
China Aid exposes abuses in order to stand in solidarity with the persecuted and promote religious freedom, human rights, and rule of law. If you wish to partner with us in helping those persecuted by the Chinese government, please click the button below to make a charitable donation.