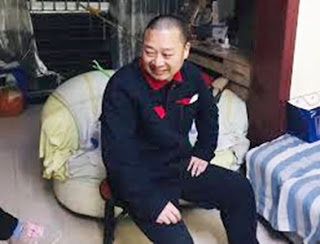 (Chengdu, Sichuan—May 6, 2020) Chen Yunfei, a well known dissident, was held under criminal detention by police and then residential surveillance on the charge of picking quarrels and provoking trouble last year because of his online speech. Though he was verbally notified the residential surveillance was over, he was given no legal documentation supporting that.

Chen’s residential surveillance ended Saturday, April 18. Police brought him a document to sign and then left without giving him a copy.

On September 19, 2019, Chen was held under criminal detention and questioned about his tweets regarding the recent Hong Kong protests, Xi Jinping, and Tsai Ing-wen on Twitter. He also said he was bound to a stool for interrogation when he was just taken to the police station, but he refused to answer questions. During the detention, his health became worse because of the inadequate food and sleeping on the cement floor for two days. Chen was repeatedly insulted by the jailer, but will not speak out for fear of retaliation against his mother.

Chen Yunfei said, “I dare not speak up, you see I post nothing on Twitter. You speak out, [the authorities] would kidnap my mom so that I can not take care of my mom, so they threaten me with imprisonment”.

A month into his detention, Chen was moved to residential surveillance in his home. He said that authorities used technology to monitor him instead of dispatching people to watch him. If he posted radical things on Twitter, he would be summoned again to the police station. Luckily, Chen was able to go to the Chinese medicine doctor and purchase medicine.

Chen has a history of speaking out against the Chinese Communist Party. Originally from Da county, Dazhou city, Sichuan, he graduated from Beijing Agriculture University and participated in the 1989 Tiananmen Square protests. On March 25, 2015, Chen Yunfei with over 20 Chengdu citizens went to Xinjin county and swept the tombs of Xiao Jie and Wu Guofeng who both died in the Tiananmen massacre. On their way back, the group was blocked by over 100 police officers. Chen was criminally detained on the charges of picking quarrels and provoking trouble and detained in Xinjin county detention center. On March 31, 2017, he was sentenced to four years in prison. The original judgement was affirmed after his appeal and he was released on March 25, 2019 after completing the full sentence.