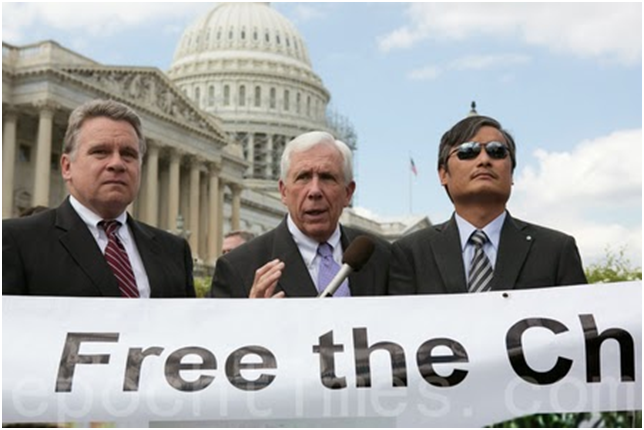 
(Washington—Sept. 19, 2014) Several U.S. Congressmen joined China Aid at a press conference at the Parliamentary Triangle in Washington, D.C., on Wednesday to discuss the status of the of the “Free the China 18” campaign. The press conference was followed by a meeting with high-ranking officials from the U.S. Department of State, in which officials met with family members of the China 18.

The campaign, which launched in June 2013, and is jointly sponsored by more than 30 international human rights organizations, aims at obtaining the release, with acquittal, of 18 prisoners of conscience from arbitrary detention by the Chinese government.

Congressmen Frank Wolf, R-Pa., Chris Smith, R-N.J., Robert Pittenger, R-N.C., and Steve Stockman, R-Texas, delivered a short speech during the press conference (see videos below), expressing their concern. They urged President Obama and the international community to take action and prompted the Chinese government to immediately release these 18 prisoners of conscience, as well as the thousands of others arbitrarily detained, in order to improve the status of human rights in China.

The daughters of some of the 18 prisoners shared their fathers’ stories and conditions during the press conference as well. Ti-Anna Wang spoke of being denied a Chinese visa for more than five years, resulting in the inability to visit her father, Chinese pro-democracy veteran Wang Bingzhang. “Grace” Ge Geng, daughter of prominent rights lawyer Gao Zhisheng, who was released from prison on Aug. 7, shared her concern over her father’s poor physical and mental health and urged the Chinese government to allow Gao to come to the U.S. for medical treatment. “Esther” Huixin Zhang, daughter of the detained Nanle County Christian Church pastor, Zhang Shaojie, shared her concern over her father’s recent appeal rejection and sentence of 12 years in prison for “gathering a crowd to disrupt public order.”

Others who spoke included “Rachel” Ruoyu Chang, daughter of Chang Boyang, a rights attorney who has been in police custody since he was taken in for questioning on May 27, 2014, and is an unofficial member of the China 18, Chen Guangfu, the brother of blind Chinese lawyer Chen Guangcheng and father of Chen Kegui, who was detained after his uncle escaped house arrest, and Mr. Thinley Kalsang and Ms. Tencho Gyatso representing Tibetan prisioners of conscience.

“Joshua” Dao Wang, formerly of the much-persecuted Liangren Church of Guangzhou, Guangdong, also attended the press conference with several believers as his guests. Wang and his group held posters calling for the immediate release of four detained Liangren Church members.

Following the press conference, family members of the China 18 and China Aid representatives met with officials from the U.S. Department of State.

The meeting with the State Department’s Under Secretary of State for Civilian Security, Democracy, and Human Rights and Assistant Secretary of State for Democracy, Human Rights and Labor underscores the critical nature of these individual human rights cases and the U.S. government’s overall commitment to hold China accountable for its treatment of its citizens and the necessity of promoting religious freedom, rule of law, and basic human rights in China.

“Your fathers are heroes, and their efforts are not in vain,” Malinowski told the daughters.

The friends and family members were thanked for their courage and strength in advocating for their release of their loved ones, and reassured of the U.S. government’s commitment to raising these cases and the inherent human rights abuses with Chinese government officials in ongoing official dialogues, including the upcoming APEC Summit in China.

China Aid was also thanked repeatedly for its ongoing work and commitment to raising awareness of religious freedom, rule of law, and human rights abuses in China.

Additionally, Rep. Mark Meadows, R-N.C., informed China Aid of his decision to “adopt” Pastor Zhang Shaojie under the Tom Lantos Human Rights Commission and become his official advocate in Congress during a meeting with Fu and others.

Video footage of the four Congressmen’s speeches at the press conference: