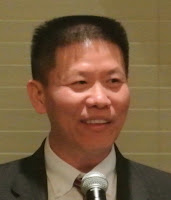 As persecution against Christ’s people has escalated in recent months, I want to share with you one unique aspect of the China Aid ministry besides prayers and advocacy efforts. This is our ministry of legal aid to the persecuted.

Some may wonder whether sponsoring human rights lawyers to defend the persecuted within a non-independent judicial system is effective or not. While it is true we cannot “win” most of the cases deemed politically sensitive or religious in the legal sense of the word, we still insist on trying. Why?

First, even in the areas where Christians were persecuted, even if we did not win the desired verdict, we have found that going through a few legal procedures, such as administrative reviews or court challenges, always results with more freedom and less, or even no, persecution in that area.

Secondly, during the legal process, our bold Christian lawyers always successfully present the case to the public security bureau officers, prosecutors, and judges with both the love of Christ and the spirit of rule of law. Some judges and prosecutors even shake hands with these Christians lawyers after the trial and thank them for the “education process.”

Finally, we have actually won some remarkable cases because we refuse to give up.

In mid-August, China Aid learned of 13 house church pastors ­­­­­­­criminally detained on charges related to cult activity in Shaoyang, Hunan. We immediately launched a massive legal defense campaign by organizing 26 lawyers to defend the persecuted pastors. Each of the lawyers made three to four trips to the area to represent the detainees. The pastors and other church members were accused of organizing a cult and using superstition to undermine law enforcement. Criminal detention is usually the first step in the Chinese legal process after being formally charged with a crime; a conviction usually follows. But by Aug. 27, in an almost unprecedented victory, all 13 leaders were released.

China Aid had other hard-fought victories in 2013. In Xinjiang, the local public security bureau was compelled by the court to apologize to “illegal” house church leaders and was even made to provide compensation for loss of property because of officers’ abuse of power, which was established by the lawyers China Aid provided.

China Aid helped win another landmark victory in Shanxi province last year in the case of young couple who were forced to abort their unborn child in the eighth month of pregnancy. A Christian lawyer named Zhang took up the case, which concluded when the local government compensated the family 300,000 yuan (US $48,864).

China Aid also financed a widely reported trip to China by Dr. Devra Marcus to investigate the denial of medical treatment to Zhu Yufu, a jailed human rights activist serving a six-year sentence for writing a pro-freedom poem. We engaged attorney Zhang Zanning, who is a professor at Dongnan Universiting in Nanjing, Jiangsu, following Dr. Marcus’ visit. Zhang has since represented Zhu Yufu’s ongoing appeal, which has resulted in improved conditions for Zhu.

In all these cases, what we have done from the U.S. is provide minimal financial support to cover meals and travel expense for those brave lawyers—an amount that is equivalent to what the average U.S. attorney would charge their clients for two to four hours of work. Without your generous gift to China Aid, we could accomplish neither these results nor the results of many unlisted cases. In 2013 alone, we provided legal aid for 41 cases and helped sponsor 27 rule of law seminars for more than 3,000 local leaders.

China Aid hosts press conference with families of prisoners of conscience, US Congressmen

Several U.S. Congressmen joined China Aid at a press conference in Washington, D.C., on Wednesday to discuss the status of the of the “Free the China 18” campaign on Sept. 17. The press conference was followed by a meeting with high-ranking officials from the U.S. Department of State, in which officials met with family members of the China 18.

The campaign, which launched in June 2013, and is jointly sponsored by more than 30 international human rights organizations, aims at obtaining the release, with acquittal, of 18 prisoners of conscience from arbitrary detention by the Chinese government.

Congressmen Frank Wolf, R-Pa., Chris Smith, R-N.J., Robert Pittenger, R-N.C., and Steve Stockman, R-Texas, delivered a short speech during the press conference, expressing their concern. They urged President Obama and the international community to take action and prompted the Chinese government to immediately release these 18 prisoners of conscience, as well as the thousands of others arbitrarily detained, in order to improve the status of human rights in China.

The daughters of some of the 18 prisoners shared their fathers’ stories and conditions during the press conference as well. Ti-Anna Wang spoke of being denied a Chinese visa for more than five years, resulting in the inability to visit her father, Chinese pro-democracy veteran Wang Bingzhang. “Grace” Ge Geng, daughter of prominent rights lawyer Gao Zhisheng, who was released from prison on Aug. 7, shared her concern over her father’s poor physical and mental health and urged the Chinese government to allow Gao to come to the U.S. for medical treatment. “Esther” Huixin Zhang, daughter of the detained Nanle County Christian Church pastor, Zhang Shaojie, shared her concern over her father’s recent appeal rejection and sentence of 12 years in prison for “gathering a crowd to disrupt public order. 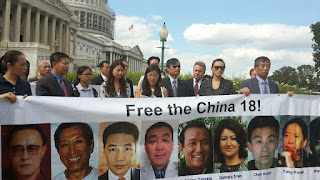 Others who spoke included “Rachel” Ruoyu Chang, daughter of Chang Boyang, a rights attorney who has been in police custody since he was taken in for questioning on May 27, 2014, and is an unofficial member of the China 18, Chen Guangfu, the brother of blind Chinese lawyer Chen Guangcheng and father of Chen Kegui, who was detained after his uncle escaped house arrest, and Mr. Thinley Kalsang and Ms. Tencho Gyatso representing Tibetan prisoners of conscience.

“Joshua” Dao Wang, formerly of the much-persecuted Liangren Church of Guangzhou, Guangdong, also attended the press conference with several believers as his guests. Wang and his group held posters calling for the immediate release of four detained Liangren Church members.

The Nanle County People’s Court sentenced two Nanle County Christian Church members to 1 1/2 years and one year in prison after charging them with “gathering a crowd to disrupt public order.”

Zhang Cuijuan, sister of the detained Pastor Zhang Shaojie, was sentenced to 1 1/2 years in prison. The evidence presented against her was taken from various instances that had occurred over the past several years.

Zhao Junling, who was tricked into dismissing his lawyers in exchange for “leniency,” was given a one-year sentence with a two-year reprieve. Zhao’s main offense involved a fine paid for having child without a permit.

Zhang told the court she would appeal the sentence as the “accusations against her are not based on facts,” a church member said. However, Zhao said he felt trapped because he had dismissed his lawyers and told the court he would not appeal his sentence.

Authorities in China’s coastal Anhui province shut down and demolished a private, church-run school in early September, claiming that certain equipment did not meet safety standards when, in fact, the equipment did.

The closure of Shunchang school put nearly 800 middle school and high school students in search of other education options on Aug. 31, the day before the new school year began.

Teachers from the school said that they had worked closely with the government and other local entities to ensure that all standards were met in order to give the school its best chance at staying open. “They all use the government’s system,” a local pastor said of the school.

A local Christian said the real reason the school was shut down was the leaders’ Christian beliefs.