China Dissident Author Is Allowed to Move to U.S.

BEIJING—A Chinese dissident author who published a controversial book about China’s Premier Wen Jiabao has gone into self-imposed exile in the U.S., suggesting a change of tactics by Chinese authorities who last year prevented him and other activists from leaving the country.

Yu Jie, who is also a leader of the underground Protestant church in China, said he had been repeatedly denied permission to leave China after being severely beaten by security agents in late 2010, but was finally allowed to fly direct from Beijing to Washington with his wife and young son on Wednesday. 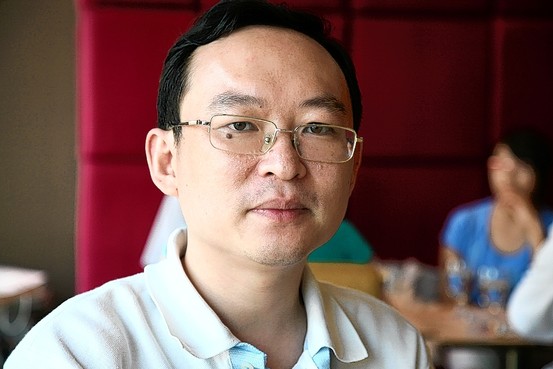 European Pressphoto Agency Photo: Chinese author Yu Jie, shown in Beijing in August, was allowed to fly to Washington with his wife and son Wednesday.

“Only after negotiating with them several times was I able to make this trip,” he said in an interview. “They sent five security officers to see me to the departure gate and didn’t allow any friends to see me off.”

His departure came the same day that Treasury Secretary Timothy Geithner met Chinese Vice President Xi Jinping. Mr. Xi is widely expected to be promoted to Communist Party chief in October or November in a once-a-decade leadership change and is expected to visit the U.S. this year.

Mr. Yu’s book, “China’s Best Actor: Wen Jiabao” was banned in China but published in Hong Kong in August 2010. A month prior to that, Mr. Yu was detained by Chinese security services and warned that he could face jail for the work, in which he criticized Mr. Wen for not pursuing bolder reforms.

The Chinese government has in the past released several prominent dissidents and sent them into exile in the U.S. in response to pressure from the U.S. government over its rights record, especially ahead of key bilateral meetings.

But Mr. Yu said he didn’t think the U.S. government played a role in the decision to allow him to leave as the Obama administration had been, he said, “weak” on human rights in China.

He said he had bought a plane ticket and obtained a U.S. visa in December and then confronted Chinese security officials, threatening either to seek asylum in the U.S. Embassy, or to cause a scene at the airport by trying to leave without permission.

On Jan. 4, a senior security official finally gave him permission to leave after he signed a statement promising not to engage in any “illegal and unconstitutional” activities overseas, he said.

“They said I wouldn’t be allowed back if I did anything they didn’t like,” he said, adding that he planned to stay several years to begin with.

Mr. Yu, who is 38 years old, is one of China’s most prominent dissidents, and was among a small group who met President George W. Bush at the White House in 2006. The U.S. government has also repeatedly expressed concern about Mr. Yu’s treatment by Chinese authorities.

“From Beijing’s perspective, this might be a deliberate gesture ahead of Xi Jinping’s visit,” said Nicholas Bequelin, a senior researcher for Human Rights Watch. “But they could have just decided they were better off having Yu Jie overseas.”

He and other human-rights activists cautioned that Mr. Yu’s departure didn’t represent an easing of Beijing’s crackdown on dissent, since he wasn’t technically a prisoner and should have been free to travel as he pleased. Many other dissidents are still facing the same restrictions.

Joshua Rosenzweig, an independent human-rights researcher in Hong Kong, said: “It is a different approach in a sense but has to be seen as part of a bigger crackdown: They’re very resourceful in finding different methods for different kinds of individuals.”

Chinese authorities have prevented a number of high-profile dissident artists, writers, activists and lawyers from leaving the country over the past year or so amid what rights activists say has been the heaviest crackdown on dissent in a decade.

Hundreds of dissidents have also been detained, confined to their homes or placed under surveillance since anonymous calls for a Jasmine revolution began circulating online in China in the wake of the uprisings in the Arab world last year.

Ai Weiwei, China’s most famous contemporary artist, was held in extrajudicial detention for 81 days last year after being detained as he tried to board a flight to Hong Kong. He was freed but says he has to apply for permission to leave the area around his home.

Liao Yiwu, another writer who had been critical of the Chinese government, fled into exile in Germany in July after crossing China’s land border with Vietnam. Chinese authorities had prevented him from leaving China to attend a literary festival overseas.

A lawyer for Liu Xiaobo, the jailed winner of the Nobel Peace Prize in 2010, has also said that he was prevented from leaving the country in November of that year.

Mr. Yu is the founder of the Independent Chinese Pen Centre, which campaigns for freedom of expression in China. He said he was “kidnapped and severely beaten” by Chinese security services in December 2010, and almost died of his injuries.

The Voice of America posted video footage on its website of Mr. Yu looking healthy and relaxed as he arrived at the airport in Washington on Wednesday night with his wife and child.

Web censors in China blocked searches for “Yu Jie” on popular microblogging sites, which work like Twitter, but some friends and fellow writers posted comments about his departure.

“In the 10 or more years that we knew each other, I always knew today would come. Now it has come,” Qin Liwen, another writer, wrote Wednesday on the Sina Weibo microblogging service. “I hope more young people will know about him, start searching for his name and the things he writes, and wake up together.”