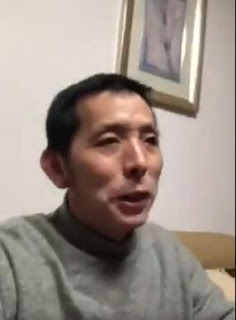 Fang Bin filmed himself in Wuhan No. 5 Hospital and the nearby crematorium on Saturday, showing doctors and nurses carrying out corpses. He also entered a hospital room and showed a dying patient. As a result, he concluded that many people were passing away in the hospital.

Then, authorities claiming to be medical personnel arrived at Fang’s home and told him he must be quarantined. They rummaged through his place without any search warrant and confiscated two computers.

He was detained at the Hanyang Branch of the Sixin Police Station, with officials saying he might be infected.

Officers also interrogated him and said he should not report negative news. They originally planned to detain him but decided against it due to media coverage. He was released at 12:00 a.m. this morning.

Fan Junyi, a resident of Changsha, Hunan, was summoned by police, who insisted he had posted news alleging the virus had come from the Wuhan P4 Lab. He was taken away to a state security prison and questioned. The post was later found to not have been from him.

ChinaAid has not been able to verify whether or not the claim the virus has come from a lab is true. Officially, China has said it originated at a seafood market. The market has been closed.

Another person, Gao Fei, was sentenced to seven days in administrative detention on Jan. 29 for handing out face masks on the street, collecting hospital supplies, and posting about the coronavirus online.

Other people have been detained for posting news of the virus on social media, accused of spreading rumors.

In the meantime, people within China are being denied medical treatment after they present symptoms of the virus, due to lack of supplies. The parents of a man surnamed Zhang were turned away and made to travel every day to receive shots, increasing the risk they will infect others.

Since then, it has swept across China and made its way to other parts of the world, infecting more than 17,000 people and causing at least 360 deaths. Symptoms include a fever and a dry cough. In some cases, it develops into pneumonia or respiratory failure and can cause death. It is passed person-to-person.