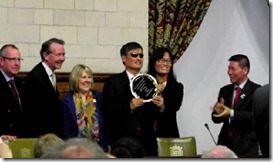 (London–May 24, 2013) A delegation led by ChinaAid president Bob Fu and blind legal activist Chen Guangcheng to promote a trans-Atlantic human rights pact on China wrapped up its final day of a highly successful European tour with meetings with academics and non-government organizations in London on Thursday.

The four days in Britain was the final leg of a 10-day trip to Europe that also took the group to Oslo, Brussels and The Hague.

Upon arrival in London on Monday (May 20), the group’s time was spent mostly in interviews with Britain’s mainstream media, including all the BBC divisions (BBC TV World, BBC World Service Radio, BBC TV News Night and BBC Chinese Service Radio), all of whom sent their prime-time anchors.

Peter Simpson, the China correspondent for The Daily Mail, one of the world’s highest readership English-language newspapers (monthly traffic to its website exceeds 100 million), finally was able to conduct a face-to-face interview with Chen after being chased out of a Beijing hospital a year ago by Chinese Domestic Security Protection agents when he tried to see Chen the day after Chen was forced to leave the refuge of the U.S. Embassy following his dramatic and miraculous escape from brutal extra-judicial house arrest in his hometown.

See also this report by The Telegraph: http://www.telegraph.co.uk/news/worldnews/asia/china/10066972/Chen-Guangcheng-pressures-the-EU-on-secret-human-rights-talks-with-China.html
On Monday afternoon, the delegation also met with Shadow Foreign Minister Kerry and had a meaningful discussion with her about China’s human rights record and British foreign policy.

In the evening, the delegation visited the British Parliament at the invitation of Lord David Alton, a senior member of the House of Lords and a prominent human rights activist, on behalf of both houses of Parliament.

This was followed by the presentation of the inaugural “Westminster Award for Human Life, Human Rights and Human Dignity” to Chen.  Twenty members of parliament, government officials, and NGO and media representatives attended the ceremony in the Parliament’s Grand Committee Room.  The award, an engraved silver platter, is to be presented annually by All-Party Parliamentary Pro-life Group and is funded by the Right to Life Charitable Trust.  (For more details, see https://chinaaid.org/2013/05/first-ever-westminster-award-for-blind.html)

In his remarks at the award ceremony, Chen described the threat to human life of the violent measures used by the Chinese regime to enforce the one-child policy. He said that countless Chinese families have mourned the loss of life of unborn babies and pregnant mothers as a result of violent family planning enforcement and the government’s disregard for life. He added that the although the incidences of mass protests involving 100 or more people has now reached an estimated annual figure of 250,000, this still is but the tip of the iceberg. Civic awareness among Chinese citizens is growing, Chen said, and this will result in positive changes in China’s future. Regrettably, in the face of the Chinese Communist government’s violent actions against its own people and its brutal suppression of human rights activists and rights defenders, some democratic countries have put economic benefits first and are either ignoring or sidelining human rights issues.

Chen added that in this information age, the whole world is a global village and when human rights is being threatened anywhere, we will all soon learn of it. We must not turn a blind eye when we see evil being perpetrated, nor remain unmoved and indifferent to the tears and bloodshed of the victims. He called for an end to dialogue with the Chinese Communist regime and instead, stand with the Chinese people to defend our common human dignity and the value of human life.

Chen pointed out that there is nothing to fear from those in power who lack morals and legitimacy and who violate the law; each person has limitless potential and so long as we persevere and stand firm, we can change the world. Everyone standing together can bring an end to totalitarianism so that people worldwide can truly embark on the road to democracy.

When Chen finished his moving speech, which was translated by Fu, the audience of British political figures, media, human rights group representatives and students gave him a standing ovation.

The delegation’s UK visit has clearly succeeded in drawing the attention of all sectors of British society to the seriously deteriorating human rights situation in China and the importance of a trans-Atlantic U.S.-European pact on human rights in China.

ChinaAid believes that the democratic nations in Europe and the United States need to have a clear view of what is happening in China and give up its illusions about the Chinese government, which has time and again acted without integrity. The policy of appeasement on human rights and putting economic interests first must end. When the democratic world stands united, it can clearly say to the Chinese government: Human rights is more important than any other issue and the standard for human rights is universal; democratic nations will not give up their principles and compromise with the Chinese Communist regime.