ChinaAid Exclusive: An open letter to brothers and sisters worldwide from the Kachins of Myanmar, calling on just-peace (Kachin, Burma – Feb. 01, 2013) China Aid Association is the only authorized media to publish this letter of appeal below. In collaboration with house church leaders in China and China Association of Christian Journalists, China Aid Association in the past year sent journalists to the frontlines of fighting to conduct interviews, and provided large quantities of free manpower and material resources, including food and medicine in urgent demand as well as monetary support to the war-scourged Kachin brothers and sisters. We call on all churches and Christians to be concerned about the members of the body of Christ who are suffering. Donations can be made to China Aid Association and it will be delivered to the Kachin brothers and sisters timely. May the Lord Jesus Christ bless our good work. Online donation-making method through China Aid Association can be found at: Burmese-refugees.ChinaAid.org

An open letter to brothers and sisters worldwide from the Kachins of Myanmar, calling on peace of righteousness

The Kachins, alias the Jingpo people, is a sparsely documented and rarely known ethnic group with a high level of self-governing. They reside in northeastern Myanmar bordering China’s Yunnan province and Tibet. The Kachins have a rich reserve of resources and produce a large quantity of jade and hard timber. The Kachin population roughly totals 1.2 million. Over a century ago, missionaries sent by American Baptist churches brought the Christian faith to the Kachins. Now, the number of believers of Jesus Christ comprises over 96% of the entire population. Christian churches can be see everywhere in the Jingpo land and the sound of praise and prayer can be heard anywhere.

The majority of countries and ethnic groups in the adjacent area surrounding the Kachins believe in Buddhism, which is also the main religion of Myanmar.

On December 25, 2012, a supposedly joy-filled day when Christians throughout the world celebrated Christmas, the Kachin sisters and brothers were thrown into war. On this day, the Burmese army launched an offensive against the Kachins. On the surface, the purpose of the Burmese army is to rearrange the minority ethnic groups in their surrounding area, including the Kachins, and to seize the rich resources of the minority groups. In fact, there is a spiritual warfare behind this war because the Burmese army already launched a large-scale offensive half a month before the Christmas Day, clamoring that “let’s wipe out the Jingpo people on Christmas Day and test whether their God is capable of protecting them or not.” 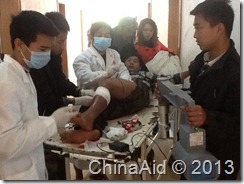 The brutal war caused massive casualties among the Kachin brothers and sisters, but due to their primitive medical conditions, the injured could not receive the treatment they needed. Many people have one or multiple shell splinters left in their bodies and could not have it taken out. Since the Kachins do not even have the most basic X-ray and CT machines, there is no way to locate shell splinters in the body.

In the difficult circumstances, the Kachin brothers and sisters have never stopped praying and looking up to God. Sound of praise and prayer ring out from the refugee camps in the combat area. Each troop has a chaplain and they always pray before they go into a battle.

Our God hears prayers. He did many wonders and miracles in this war. Church elders testified that when the Burmese army was launching an intense bombing, the Kachin brothers and sisters prayed to God. All of a sudden, a heavy fog set in. The Burmese aircrafts could not see their bombing targets and had to go back. 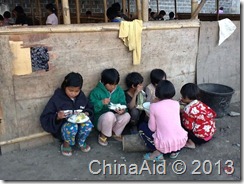 camps who endure starvation and saving the brothers and sisters who were injured for the sake of protecting their homeland and family and need medical treatment? Please also offer your earnest prayers, imploring him to stop the Burmese army’s attack on the Kachin brothers and sisters. May the Burmese government army be freed from Satan’s deception and stop slaughter and conquest right away.

As we offer up our compassion and intercession, we are abiding by the new commandment our Lord Jesus gave us – love one another and the world will see that we are our Lord’s disciples. We ought to abide by the Lord’s commandment and love the Kachin brothers and sisters. We shall intercede for them and offer our help so that they can defeat the Burmese government army utilized by Satan, the kingdom of people can be established and the work of God among the Kachins can be manifested to the unbelieving countries and ethnic groups surrounding the Kachins. May brothers and sisters all over the world pray for the return of the Kachin brothers and sisters to their homeland as soon as possible and a normal life free from war.

All Christian brothers and sisters among the Kachin people