China Aid Association
Zhu Yufu, a Christian dissident in his 60s, has been sentenced again by the Chinese Communist government, this time because he posted a poem he’d written called “It’s Time” during the Arab Spring revolutions in the Middle East.  The international community immediately responded to the ridiculously heavy sentence of seven years’ imprisonment (and three-year deprivation of political rights) and expressed concern about worsening human rights situation in China. In hopes of bringing about Zhu’s early release, the Texas-based Christian human rights group China Aid Association and Zhu’s family, who had made a special trip to the United States from China, were in Washington, D.C. last week to meet with key U.S. government officials and Congressional leaders. 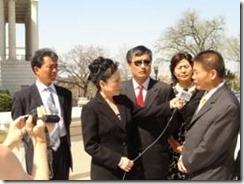 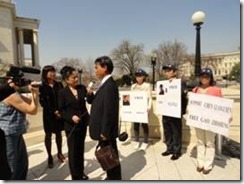 Pastor Bob Fu and Zhu Yufu’s fourth brother Zhu Qiaofu being interviewed by Radio Free Asia on Capitol Hill
Brother Zhu Yufu is a devout Christian who has always had a passion for coming to the aid of his country, willing to strive for freedom and democracy in China at the expense of his own freedom and life.  This dates back to as early as 1978, when Zhu Yufu was one of the founders of the Democracy Wall movement in Hangzhou and a freedom magazine. In 1998, to challenge the Chinese Communists’ totalitarian one-party rule, he participated in the founding of the China Democracy Party, for which he paid the price of a seven-year prison term.  After serving his time, he continued engaging in rights defense activities and the promotion of democracy.  Again, he was wrongfully sentenced, as was his son, to two years and one year in prison, respectively.  Even when not serving prison time, this famous Chinese prisoner of conscience was usually under the long-term government surveillance or being arbitrarily detained or “disappeared.”  His family members have also been implicated in his troubles. In 2011, after he was sentenced for the third time, he was sent to serve his sentence in No.4 Prison in Zhejiang Province.  In the prison, this elderly man in his 60s has been brutally persecuted in various ways. His many sicknesses are quickly worsening and his very life is at stake, but prison authorities refuse to give him any treatment.  Zhu Yufu’s fifth sister, Zhu Xiaoyan, and his sixth brother, Zhu Qiaofu, have managed to come to United States, while his fourth sister has come from Japan and they are devoting all their time in seeking help to save their brother from people of various circles.

ChinaAid has been long been monitoring and helping prisoners of conscience who are striving for religious freedom and progress in the rule of law and their families.  After learning of Brother Zhu Yufu’s critical condition, ChinaAid met with his family in a timely manner and discussed urgent plans to rescue Zhu Yufu.  ChinaAid founder and president Pastor Bob Fu brought Zhu’s family members on a hurried visit to Washington D.C. where, for several days, they engaged in a series of closely coordinated actions and were interviewed  by such news organizations as Agence France Presse, Daily Telegraph, Washington Post, Voice of America, Radio Free Asia, Radio Taiwan International, etc.

On April 9, at the U.S. House Foreign Affairs Committee’s “Chen Guangcheng and Gao Zhisheng: Human Rights in China” hearing, Pastor Fu talked about Zhu’s current critical condition and his family’s requests. Twenty members of the Overseas National Committee of the China Democracy Party came to the hearing from New York City to support Zhu Yufu’s family.  After the hearing, Congressman Chris Smith, who had chaired the hearing, met with Zhu’s family members and they shared with him details of Zhu Yufu’s condition and their hopes. Smith said he would do whatever he could to help them and to urge the U.S. government to make the Chinese government agree to release Mr. Zhu on medical parole and to eventually win his freedom. 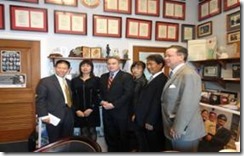 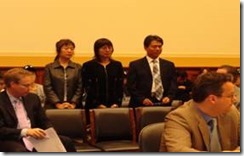 On April 10, Congressman Frank Wolf, chairman of Tom Lantos Human Rights Commission and a senior Congressman, met with Zhu Yufu’s family members in his office.  This old friend of the Chinese people who has long been concerned with promoting religious freedom and progress in human rights, after learning of Zhu’s condition, immediately said he would notify other House representatives right away of Zhu’s critical condition and get in touch with relevant Congressmen to form “Rescue Project” to save Mr. Zhu Yufu, just as he has “contracted” to rescue Mr. Gao Zhisheng.  At 9:50 a.m. on April 11, Congressman Wolf, in his capacity of committee chairman and through Congress’ special mechanism, sent a letter to the 434 other Congressmen, calling on them to respond and form a special panel to save Zhu Yufu.  He said he would write letters himself to high-level White House officials and officials in the U.S. embassy and consulates in China, requesting that the consul of the U.S. Shanghai Consulate or human rights officials go see Mr. Zhu Yufu in the prison and to urge the Chinese authorities to stop persecuting Zhu Yufu, provide medical treatment immediately and other forms of humane treatment. 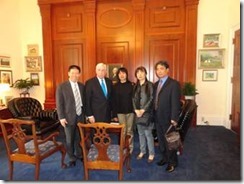 Congressman Wolf with Bob Fu and Zhu Yufu’s family members
Later that afternoon, Pastor Bob Fu brought Zhu’s family to meet with head of the U.S. State Department’s China and Mongolia Desk and the high-ranking officials in charge of global human rights, democracy and labor, and briefed them in detail of the long history of persecution suffered by Zhu Yufu and his current critical condition.  They urged the U.S. government to take active steps to help Zhu Yufu get humane treatment and freedom.  Zhu’s family members expressed their hopes and requests for U.S. government intervention and implored Secretary of State Kerry to give to the Chinese leaders in his upcoming first visit to China a letter they had written in which they express the hope that the Chinese government would release their innocent brother immediately and guarantee that he gets the necessary medical treatment so as to prevent this elderly man who has fought for the freedom and democracy in China from dying in prison. 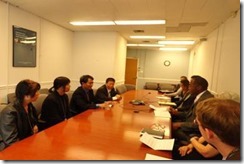 Pastor Bob Fu brought Zhu Yufu’s family members to meet with U.S. State Department officials
At 10 a.m. on April 11, Pastor Bob Fu and Zhu Yufu’s family members met with officials from the Congressional-Executive Commission on China (CECC), a high-ranking policy agency of the Congress and the administration that handles human rights in China and other issues.  The annual CECC report on human rights in China is published by this organization.  On behalf of Senator Sherrod Brown and Congressman Chris Smith, the two directors of this organization, they said that the CECC has been paying attention to cases like Zhu Yufu’s and has people designated to handle this case. Zhu Yufu’s bio and updates are on its list of prisoners of conscience. They expressed concern about Zhu Yufu’s critical condition, which they said they would immediately report to Senator Brown and Congressman Smith, and they said they would consider further actions.

On the morning of April 11, Congressman Frank Wolf, chairman of Tom Lantos Human Rights Commission, sent a letter to his 434 fellow Congressmen through the Congressional mail system asking: “Can you choose Mr. Zhu Yufu?”  It calls on other Congressmen to choose Mr. Zhu Yufu as the person they want to save in the Defending Freedoms Project started last December by the Tom Lantos Human Rights Commission. Its main intent is for each participating Congressman to choose one or more prisoners of conscience worldwide and show support; and concern by making appeals to the world on their behalf and to make efforts to rescue the prisoner of conscience until he or she obtains his or her freedom.

ChinaAid is extremely concerned about Zhu’s critical condition and will continue to monitor developments in this case and seek forces within the international community to help Zhu Yufu get timely and necessary medical treatment.  We hope he will soon be free. We are very concerned about the worsening human rights situation in mainland China and we hope the new Chinese leadership can take some real actions to stop the persecution of all prisoners of conscience and protect the basic human rights of Chinese citizens from being violated and guarantee that every Chinese citizen can enjoy a real and egalitarian legal system.