ChinaAid Likens China to Pre-WWII Germany, Warns EU Not to Stand By Doing Nothing

China Aid Association
(Brussels – Nov. 30, 2011) In its failure to uphold freedom of religion and in its overall human rights record, China today is like pre-World War II Germany, and the Western world must not stand idly by – as it did in the 1930s, ChinaAid founder and president Bob Fu warned the European Parliament on Wednesday. 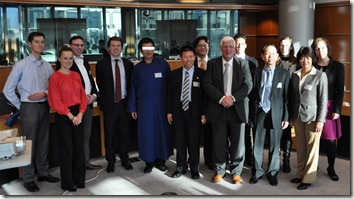 (Photo shows the ChinaAid delegation with leaders of the European Parliament at the end of the seminar on “The Human Rights Situation in China.”)

Speaking at a seminar on “The Human Rights Situation in China” at the Parliament building in Brussels, Fu expressed gratitude for Bastiaan Belder, a member of the Parliament’s Committee on Foreign Affairs, who opened the seminar proceedings, and others like him who have publicly stood in solidarity those who under persecution in China.
In his opening remarks, Belder expressed concern over the continued deterioration of China’s overall human rights record and of the rule of law and religious freedom, and pledged to continue to push China to do better in these areas. 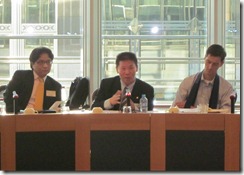 Fu reminded the European Union of the rise of Nazi Germany before World War II and warned against making the same mistake again with regard to China today.
(Photo: Fu speaking at the seminar.)
In detailing the overall deterioration of human rights, the rule of law and freedom of religion in China in recent years and describing the current situation, Fu referred to a number of the most serious cases, including the disappearance into police custody of Christian lawyer Gao Zhisheng, the brutal treatment of blind activist Chen Guangcheng, the constitutional law scholar and house church leader Dr. Fan Yafeng, who has been held under house arrest for nearly a year, the members of Shouwang Church in Beijing who have been continuously persecuted since April, the Xinjiang Uyghur house church leader Alimujiang who is serving a 15-year sentence, and the persecuted private entrepreneur in Chongqing, Sichuan province Li Jun, as well as many human rights lawyers who have been arrested, detained, placed under house arrest or been harassed by the government.
The full ChinaAid report submitted to the EU is below. 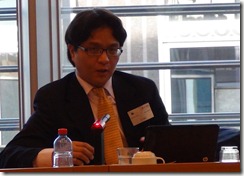 Following Fu’s remarks, another member of the ChinaAid delegation, Zhang Dajun (photo at left), spoke about his personal experience as a businessman who became a human rights activist and was persecuted by the government. The persecution escalated after Chinese dissident Liu Xiaobo was awarded the Nobel Peace Prize, and Zhang was put under almost constant house arrest or soft detention.  Following a February trip to the United States, Zhang was taken in for police interrogation for days at a time.
Then Kathy Lu, a former member of the Shouwang Church in Beijing, gave a Powerpoint presentation about Shouwang’s past 34 weeks of weekly detentions and house arrest resulting from the church’s attempts to worship outdoors after it was repeatedly kicked out of rented property.
She cried when she showed one woman, whom she knows, who was dragged with her young son to a police station and held overnight, and she described the serious abuse that others also suffered.
The ChinaAid delegation answered a number of questions from members of parliament.  They asked about the relationship between the house churches and the official Three-Self Patriotic Movement churches controlled by the Chinese government, and wanted to know what the European Union could do better to help improve the situation in China.
On Thursday, the ChinaAid delegation will speak at a public forum in Ridderkerk, The Netherlands, about the situation of Christians in China to representatives from 40 organizations, members of the European Parliament, as well as national and local media.
Below is the full text of Fu’s report to the EU.
Click this link to view or download the PDF of the report: https://docs.google.com/open?id=0B_YUgSyiG6aIY2EzNGM2ODEtNzU0Yy00MjljLWJhOWMtNWU4NjhiYjU3ZWEy

Human Rights, Freedom of Religion and the Rule of Law in China in 2011:
A Brief Introduction
“Is China Today’s Pre-WWII Germany?”
Testimony of Pastor Bob Fu
China Aid Association
Seminar of the European Parliament
on
The Human Rights Situation in China
November 30, 2011
Brussels, Belgium

In the first 11 months of 2011, the deterioration of human rights, freedom of religion and the rule of law in China reached the lowest level since the 1989 Tiananmen Square pro-democracy movement. Furthermore, this is the fourth consecutive year of such deterioration since the Olympic Games were held in Beijing in 2008. In this report to the European Parliament, China Aid Association will use material and information it has gathered (most of it from first-hand sources) in its efforts to promote religious freedom, human rights and the rule of law to summarize the current situation in China and to make recommendations for how the European Union can impact and advance China’s efforts to improve in these areas.
I. The terrible state of human rights, the rule of law and freedom of religion


II. With a clear understanding of the current situation in China, Europe and the United States can jointly promote improvements in human rights, rule of law and religious freedom in China

Conclusion
When the government of pre-WWII Germany was engaged in large-scale violations of human rights, the rule of law and freedom of religion, Western nations failed to make a serious effort to intervene. When World War II finally broke out, the Western nations paid a heavy price to achieve success, but this also resulted in many other problems for the international community. With regard to China today, Western nations should not forget history when setting their foreign policy. They need not repeat the same mistakes, and they ought not be indecisive about paying a comparatively small price now. Whether China does become pre-WWII Germany depends on the efforts of the Chinese people and the resolute stand and actions of Western society. This will be of great benefit to the future of the Chinese people and people of the world.
Most importantly, remember that in this contest, Europe is still dominant; the Chinese government is but a paper tiger. Europe need not cower, much less kowtow, to Beijing. Rather, it should seize this historic opportunity to lead the world in helping a rising China become a moral and upstanding member of the international community.
Thank you!

About ChinaAid’s Founder and President

Pastor “Bob” Xiqiu Fu is originally from China’s coastal Shandong province. He graduated from Shandong’s Liaocheng Teachers College in foreign languages, holds a double bachelor’s degree from People’s University and the Institute of Foreign Relations, and taught at the Beijing Municipal Communist Party School. In the United States, he earned a master’s degree from Westminster Theological Seminary and is now working on his PhD.
Pastor Fu was persecuted while in college for taking part in the 1989 Tiananmen Square student democracy movement. The resulting sense of hopelessness he felt led to a spiritual awakening, and Pastor Fu accepted the truth of the Bible and became a Christian passionate about spreading the Gospel. In 1996, when they were leaders of a house church of mainly college students, Pastor Fu and his wife were arrested and imprisoned for two months. They later escaped to the United States and in 2002 founded China Aid Association.
Pastor Fu and his ministry are highly regarded both by those in China and in the international arena. He is an expert on Christian persecution in China and religious freedom issues. He is frequently interviewed by media from around the world and has testified at U.S. congressional hearings and before the European Parliament and the United Nations. In his frequent travels, he has met with government officials in many countries and the leaders of Christian institutions, think thanks and other NGOs for extensive exchanges and cooperation. He is committed to promoting religious freedom, human rights and the rule of law in China.
ChinaAid’s websites：www.ChinaAid.net www.ChinaAid.org