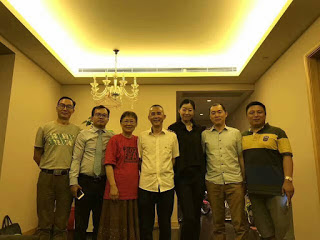 (Midland, Texas—July 9, 2018) The China Human Rights Lawyers Group released a statement today, on the third anniversary of a crackdown that led to the imprisonment of attorneys across China.

Also known as the “709 crackdown,” the nationwide persecution began on July 9, 2015, with many of the arrests taking place in the first several days. The lawyers were typically held incommunicado before being sentenced to years in prison, where they were tortured . While most have returned to their families, a handful still remain behind bars. Most alarmingly, one lawyer, Wang Quanzhang, is still missing, and his wife still doesn’t know whether or not he is dead or alive.

The China Human Rights Lawyers Group’s statement has been printed in full below.

ChinaAid exposes abuses, such as the lawyers caught up in the crackdown suffered, in order to stand in solidarity with the persecuted and promote religious freedom, human rights, and rule of law.

Statement on the 3rd Anniversary of the 709 Crackdown

On the third anniversary of the “709 crackdown,” the Chinese Human Rights Lawyers Group would like to express our sincere gratitude to friends at home and abroad for their generous and unselfish help and support to the victims of the “709 crackdown” over the past three years. We sincerely thank friends at home and abroad for their long-term commitment, unscrupulous attention, and support of human rights and rule of law in the PRC.

Since the “709 crackdown” three years ago, Lawyer Mr. Wang Quanzhang is the only one who has been “disappeared” without any news about his life or death or his whereabouts. We are particularly concerned about him – we can’t imagine what kind of physical suffering he must have been through; we can’t imagine what kind of mental journey he must have experienced in three years of being completely helpless and completely isolated from the world. We cannot but imagine what kind of courage and strength has been supporting his indomitable spirit. With all of this, we may only be left to unravel when and if he regains his freedom someday.

In addition to the deprivation of human rights defenders’ personal liberty, the authorities have used various administrative measures to deprive or limit the lawyer’s rights to practice, as a result, many outstanding human rights lawyers have been deprived of their rights to defend human rights in court. The lawyers include but are not limited to the following: Li Heping, Xie Yanyi, Sui Muqing, Wen Donghai, Zhu Shengwu, and Liu Shuqing, who have had their licenses revoked; Wang Yu, who has not been able to re-join the practice of law; Cheng Hai, whose personal law firm license has been cancelled; Bao Longjun and Shi Ping, who could not obtain internship opportunities; Huang Simin and Yu Pinjian, who had been forced to transfer from their previous law firms but still have suspended licenses and no ability to practice their legal profession.

In this cold and dark age, in this jungle society where the rule of law is drifting away from us, human rights lawyers have a long journey ahead. There will be many obstacles and challenges, and they are pressing on with little material and practical resources.

Politics that do not respect human rights are evil, and economic growth supported by low respect for human rights is a false Chinese dream. Over the 40 years of Reform, the biggest achievement is not to build a city jungle of reinforced concrete and steel, but to awaken and promote the awareness of human rights among the Chinese people, so that “human rights” no longer stays on paper, but begins to enter a state of practice. The Chinese people have been fighting to defend their rights in diversified and vibrant ways. China has just entered an era when the awakening of rights awareness is conflicting with the increasingly suppressing political atmosphere. We human rights lawyers are fortunate to live in it and to witness it at the right time.

We have realized that human rights lawyers suffer no more than ordinary citizens. We are all walking in the dark, and the human rights lawyers need to be extraordinarily vigilant, so that people with courage are no longer alone, and people with conscience are no longer frightened, so that their names can be known and their voices heard and not suppressed.

We believe that the price paid by the people of conscience will become the seed of freedom.

We are convinced that the seed of freedom will sprout and take root.

We believe that a beautiful China that respects human rights will become a reality in the near future!
About China Human Rights Lawyers Group:

The China Human Rights Lawyers Group was founded on 13 September 2013 and has been an online platform open for lawyers’ coordination. The China Human Rights Lawyers Group undertakes to “defend human rights and promote rule of law.” Since its establishment, the Group has made different endeavours including joint statements and interventions into cases/ issues with rights implications. All lawyers in China who share our vision and value, and are willing to protect the basic rights of our fellow citizens, will be welcome to join us by contacting any of our members.

We look forward to walking hand-in-hand with you!

A note from the China Human Rights Lawyers Group: Since its establishment, the China Human Rights Lawyers Group has carried out arduous struggles to defend human rights and spread universal values. The Chinese authorities have adopted many different measures to persecute the human rights lawyers in China, such as arresting them, sentencing them to jail, revoking their practice licenses, canceling their law firm’s licenses, prohibiting them from traveling abroad, tracking and monitoring their whereabouts, breaking into their hotel rooms and harassing them in the middle of the nights, intimidating their family members, preventing the lawyers’ children from going to schools, hindering the lawyers’ family members from obtaining employment etc. The young and weak group of human rights lawyers is now in dire situation.

We have been eager to have a volunteer translation team from overseas to translate the Chinese human rights lawyers’ claims and their stories of fighting against the dictatorship and evil justice system in China into foreign languages ​​and spread them to all parts of the world, so that those kind and peace-loving people from the world would get to know what is happening to this Eastern Power every day.

China has more than 1.3 billion people. The situation of this country’s human rights and rule of law directly affects the living condition of a quarter of the world’s population. China’s problems are undoubtedly also the world’s problems.