ChinaAid founder and president Bob Fu was one of five panelists invited to testify on human rights and the rule of law in China before the House Committee on Foreign Affairs at its first ever hearing on the annual report submitted to Congress by the Congressional-Executive Commission on China.


Below is the full text of his five-minute oral statement on Nov. 3, 2011 at the full committee hearing. (Photo: Bob Fu, far left, with three other panelists. Double click on photo to enlarge. ChinaAid photo)


In the first 10 months of 2011, religious freedom conditions in China continued to be poor.   In fact, religious freedom conditions are at their lowest point since 1982, the year Deng Xiaoping officially ended the policy of eradicating religion.  We have seen a hardening in the government’s attitude toward religion, and policy changes that were implemented well before the nascent “Jasmine Revolution” on February 2011 have accelerated since that time.   China’s ruling Communist Party continues to see those who peacefully advocate for religious freedom, free speech, independent labor unions, ethnic minority rights, and democracy as the biggest threat to its authority and future power.  This is the lesson the Party learned from the fall of the Soviet Union and communism in Eastern Europe.


The Chinese government tolerates the practice of religion within officially controlled organizations and has permitted some discussion about allowing “faith-based” charity work. But the fact remains that the government also seeks to control and repress any religion or religious group that refuses to register with the government, as well as those with extensive foreign ties, and those it regards as a potential threat to the Communist Party.  This includes not just “house church” Protestants, which is the focus of ChinaAid’s work, but other religious groups as well.  As China’s influence and power grows, this pattern is unlikely to change, and certainly not before the 2012 transfer of power to a new generation of senior leadership.  Religious groups will either bend to the Party’s demands or be broken by its force.

Nonetheless, we do have a two-fold message that offers some hope, particularly if there is concerted, coordinated action from the United States and other governments on human rights.

First, international attention matters and can make a difference.  That’s because it constrains what the Chinese government does and how it uses its force against rights advocates.  We have firsthand testimony from dissidents and prisoners that international attention improved their conditions and in some cases even protected them.  China’s security forces remain brutal, but for imprisoned dissidents and religious leaders, silence can mean death in Chinese prisons. 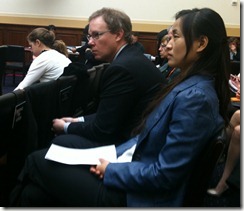 I want to introduce [to] you in today’s audience, there is a lady from China. She is the wife of a Chinese democracy advocate: Ms. Feng Xia.  Her husband was imprisoned for democracy work already for eight years.  And on Feb. 19th he was detained and arrested again for simply forwarding some twitter messages.  He did not even organize anything, just forwarding a few twitter messages.  In the past eight months, both his wife Ms. Feng Xia and their six-year-old son were denied any access to even visit her husband and their dad.  And Ms. Feng Xia coming here, of course risking lots of things, and quitting her job, and just to want make her voice to be known.  So I would really ask members of Congress and the media to talk to her, to let her know that her husband would not be forgotten.  She’s heading back to China tomorrow morning.  (A video of Feng Xia talking about her husband’s case is available here: https://chinaaid.org/2011/10/china-house-church-christian-wife-feng.html)

Second, a growing rights consciousness is spreading across China, exemplified by courageous human rights lawyers such as Gao Zhisheng, Chen Guangcheng and many others who challenge Chinese government’s corruption and human rights abuses.  The growing netizen community in China is the main conduit by which this rights consciousness is spreading.  The U.S. government, as maybe the only government that China cares to listen to, must stand firmly and publicly with those in China who are fighting peacefully for freedom and rights.  These brave and patriotic souls are fighting for a future China that respects human rights and the rule of law.

The United States should make religious freedom and freedom of expression on the internet priorities of the bilateral relationship. Together, these two rights will do more to improve U.S.-China relations than all of our trade, investments, and cooperation on shared security interests.

I want you also [to] pay attention to the increasing propaganda campaign by the Chinese government in the United States.  Yesterday I was in Dallas after presenting a copy of the Bible to former president bush and first lady Laura bush as the freedom collection of his presidential center.  The Bible was hand-copied by the Chinese prisoner in the labor camp, in order to read the Bible.  And then I found out the Chinese government actually orchestrated a so-called Bible exhibition campaign held already in Washington dc and Chicago and this week in Dallas and next week will be in the Billy Graham Evangelistic Association.  And it’s nothing but political manipulation. Lies! The tragic thing is — Americans I think should be woken up. [They have] become sponsors, raising funds for this propaganda all over the U.S.  What are they doing?

The full text of ChinaAid’s report to the Foreign Affairs Committee is here: https://chinaaid.org/2011/11/freedom-of-religion-and-rule-of-law-in.html