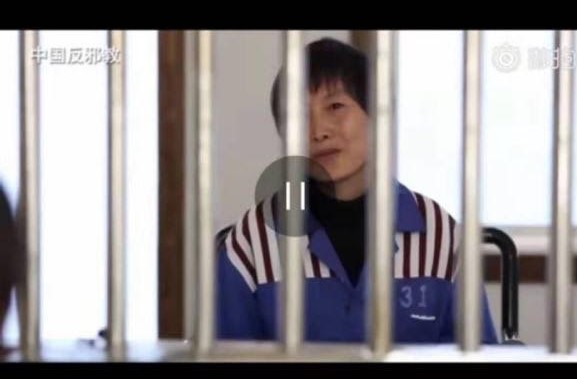 Sister Ju in prison.
(Photo: ChinaAid)
(Lincang, Yunnan Province—Feb. 13, 2021) During the Chinese New Year, ChinaAid encourages supporters and “pray-ers” —”Never forget those imprisoned for their faith…, especially Ju Dianghong and Liang Qin.” ChinaAid also urges people to write letters to these two imprisoned Christian sisters Chinese Communist Party (CCP) authorities wrongly sentenced in 2017.
Despite Ms. Ju and Ms. Liang denying that they belonged to a cult the CCP had targeted as part of a province-wide crackdown, a Lincang court in southern Yunnan Province harshly sentenced them to 13 and 10 years in prison. The court issued the longer sentence to Ms. Ju Dianhong for allegedly being a cult leader.
Ms. Ju emphasized that she had never heard of the “Three Grades of Servants,” the religious sect CCP authorities accused her of leading, recruiting members and doing missionary work for, and spreading news of the apocalypse. Ms. Ju did not even know the definition of the word “cult.” She and Ms. Liang repeatedly stated that they only participated in Christian activities. In the court’s final verdict, authorities labeled Christian books like Pilgrim’s Progress and Streams in the Desert as “evil cult” materials. In her defense, Ms. Ju said:

I only believed in and preached about Jesus, never harming anyone or acting contrary to biblical principles.

###
See with what large letters I have written to you with my own hand!
But God forbid that I should boast except in the cross of our Lord Jesus Christ,
by whom the world has been crucified to me, and I to the world.
~ by Paul in Galatians 6:11&14 (NKJV)