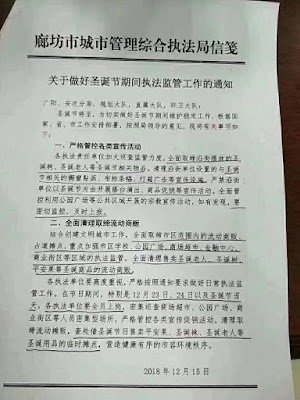 (Kunming, Yunnan—Jan. 4, 2019) Over the Christmas season, Chinese officials in several areas of the country ordered the removal of all Christmas-related decorations and the cancellation of Christmas celebrations.

In a message on the popular Chinese social media platform WeChat, Li Shaoxiang, the assistant director of Gulou Police Station in Kunming, Yunnan province, ordered all hotels, karaoke establishments, internet cafes, bars, and other venues where people gather from using Christmas decor, including stockings and Christmas trees, and told them not to allow employees to wear Santa hats. The companies are also not allowed to organize Christmas events and should remove any existing Christmas decor “by themselves,” the message states.

To avoid gaining media attention, Li also ordered the recipients not to screenshot the notice and forward it to others. The affected business owners responded that they had received the commands.

A similar crackdown occurred in Langfang, Hebei province, where government officials prohibited decorations and told vendors there would be legal consequences if they sold stockings and Santa figurines.

In light of this, a Christian from Hebei identified only by his surname, He, said that in the past, government personnel did not take a stand on Christmas.

“We learned that some schools here didn’t allow students to hang out on Christmas Eve,” he said. “That is, they were not allowed to celebrate Christmas.”

He drew a direct correlation between the crackdowns and Chinese President Xi Jinping assuming power in 2013, saying that they never happened prior to that.