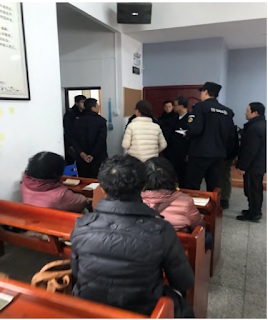 In late June, the Xuzhou Municipal Ethnic and Religious Affairs Bureau in Jiangsu Province issued a 100,000 yuan (roughly $14,535 USD) fine on June 26 to two landlords who rented venues to a house church meeting at Wanda Plaza, Tongshan, according to reports.

Officials say the landlords have been providing a place for illegal religious events that have been “attended by a large number of people, been of large scale, and have had bad effects.”

A Christian named Mr. He believes activity by authorities is to strike fear into landlords “so they will never rent their property to a church.”

He says most people do not speak out despite their anger to avoid getting in trouble with police. According to him, some landlords work with authorities to drive churches away.

Past reporting by ChinaAid discusses cash rewards doled out by authorities to residents who report on “suspicious illegal religious sites and activities.”

A government office in Henan province announced in late January the opportunity to trade factual tips about “illegal religious activities” for cash rewards.

Activities deemed as “underground” are banned, along with believers who are “young” or of an ethnic minority background. Chinese religious regulations forbid children under the age of 18 from participating in religious activities.