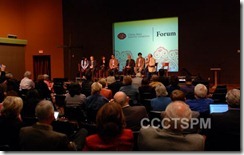 On November 1, the Chinese Bible Ministry Exhibition, the Dallas host of the Chinese Bible exhibition “Thy Word is Truth,” held a forum at Northwest Bible Church in Dallas.  The participants were representatives of China’s government-controlled church and two distinguished Dallas Theological Seminary professors.  Dallas Theological Seminary and Bible Study Fellowship were the two organizations that formed the Chinese Bible Ministry Exhibition (CBME).  For more information, see http://www.chinabibleexhibition.com/about-cbme.html and http://www.chinabibleexhibition.com/faqs.html
The following are notes and observations of a forum attendee, a respected American missionary leader to China who wishes to remain anonymous. Note: material in brackets was added for clarification.
Rev. Kan Baoping, General Secretary, China Christian CouncilWhy are we here? Mainly because some people in America continue to believe there is a need to smuggle Bibles into China… and Christians are being persecuted in our country. If we Christians in China were really under persecution, would we be able to come here and do all the ministries we do in China? 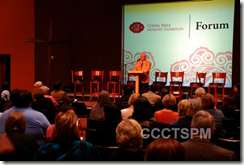 Dr. Michael S. Lawson, Senior Professor, Christian Education Department, Dallas Theological Seminary•    I’ve been to China three times to meet with officials who are very interested in partnering with the American church.
•    Churches, meeting places, home groups – all registered. Bush’s mistake [in saying there are unregistered house churches].                                                (Photo: Dr. Michael Lawson addressing the forum.)
•    Crowded churches – overflow, Christmas
•    Exhausted pastors and home group leaders
•    “Unlike any church in the world… and I’ve been everywhere.”
•    Possibility of heresy due to lack of biblical teaching
•    Introduction of BSF [Bible Study Fellowship] and Stephen Ministries is a great step forward
•    What is the role of the church in society? – a great question being asked by the government

Dr. Michael Pocock, Senior Professor of World Missions and Intercultural Studies, Dallas Theological Seminary•    I’ve been to China four times…
•    Concerns about heresy. What’s wrong with preaching a message that calls people to sell their houses… and then leaves them homeless?
•    Impressed with the faith and commitment of the students and church leaders
•    “Legal and legitimate house churches” that are associated with larger TSPM churches
•    Why would 5,000 show up on Sunday morning unless the preaching was meeting felt needs?
•    Since 55 million Bibles are printed in China each year, there is no need to smuggle Bibles into China. Available everywhere. (In contrast to this number, in the closing report the General Secretary of CCC reported that 3.5 million will be printed this year. This was the report that used PPT and the translator forgot to use decimal points.) No one mentioned how many of these Bibles are sent/sold outside of China. The written materials refer to this fact but no percentage or number is shared.
Rev. Lin Zhihua, President, China Christian Council in Fujian province; Vice President, China Christian Council•    Since the Open Door Policy, the Communist Party has tried very hard to maintain religious freedom.
•    Children’s programs, summer camps, etc.
•    If you still believe there is persecution in China, please come to China and see. Come to Fujian.
•    Problems and challenges due to fast growth – lack of trained leaders, urban migration leaves many infirm people in countryside – and no church leaders.
Final Report by Rev. Xu Xiaohong, Secretary General, National Committee of the Three Self Patriotic Movement Major Challenges – He mainly repeated what the earlier reports had included, but I did hear one new thing. He spoke about the negative impact of denominationalism in opposition to “the era of post-denominational unity in China.”
My questionsThese were submitted on index cards, each using a different style of “handwriting.” Amazingly, all four were read… although not necessarily answered.
1.   Did anyone in the CBME attend Lausanne Congress on Evangelism in South Africa last year? If so, how did the Chinese church leaders respond to and utilize information and the fellowship with Christians from around the world?
Answer: “To my knowledge, no one in our delegation attended… We had considered going, but then we heard that the organizers of the Congress has already chosen a list of people to invite, excluding us. Since we had not been respected, we decided not to participate.”
Pocock said that the event organizers really “messed up” by not inviting the TSPM in appropriate ways.
2.    In his presentation Dr. Pocock referred to legal and legitimate home churches related to the TSPM. Does this imply that there are illegal and illegitimate churches? If so, what makes a gathering of people in a home for Bible study, prayer and worship illegal?
Answer: In his response, Dr. Pocock referred to the spread of heresy and cults, and the negative impact this can have on a population. For example, people selling their homes because Jesus is returning soon – and being left homeless. He was connecting the government’s policy of forbidding unregistered home churches with the government’s desire to protect the people from bad theology and resulting negative social impact. Dr. Pocock used a concern for doctrinal purity to defend and justify the government church’s opposition to all religious activity outside their “registered” network. He was very passionate.
Dr. Lawson then followed up and gave a long speech that, in effect, defended the Communist government’s strong-arm tactics to control the masses. Some approximate quotes – “I have met with some officials… They have a hard job feeding 1.4 billion every day… They and we don’t want this huge population to get hungry and become restless….” He eventually caught himself and somewhat apologized for “preaching.” My opinion:  this was no more “preaching” than the exciting propaganda rhetoric Chairman Mao used at Tiananmen Square in 1949.
3.    How can we pray for the entire church in China. By this I mean those who trust Jesus Christ – whether they are in registered or unregistered groups?
The moderator, Dr. Lawson, only read the first line of the question. He ignored the fact that my question intentionally included the existence and legitimacy of Christians outside the TSPM.
4.    In the verbal and written reports, the TSPM/CCC delegates stated that there are 23 million Christians in China. Could you tell me more about how you came up with this number and is the number growing?
Answer: As the moderator, Lawson responded that the speaker’s reference to the “23 million Christians in China” was only the report of one survey… “and the author of the question misunderstood.” However, the CCC leader went on to disagree with Lawson and stated that the 23 million is a current and accurate number for the total of all Christians – not just TSPM – according to the best research in 2010.

My Overall ReactionI was not surprised by anything the Chinese delegates shared. However, I was totally shocked by the extreme position taken by the DTS [Dallas Theological Seminary] faculty members. I expected them to be hospitable and supportive and gracious with official delegates from the government church of China. This is basic to our faith, even in the presence of people with whom we have differences… even our “enemies.” However, these two professors went much farther:
•    They sought to justify the governments strong arm tactics to control religion because of the possible spread of heresy. Do they really think the Communist government cares if house church groups hear orthodox doctrine?
•    They sought to justify the controlling tactics of the government in general due to the large population. Did he/they really mean to go on record as defending the controls of the Communist (atheistic) rulers of China?
•    I was also surprised that both professors took “shots” at George Bush, comments that were greatly appreciated by the Chinese government officials who chafe at Bush’s ongoing concern for human rights and especially the persecution of Christians in China.
I am glad that DTS [Dallas Theological Seminary] and BSF [Bible Study Fellowship] have apparently been given permission to do some teaching in China ― a freedom that could be removed tomorrow. I don’t think this strategy to go through an open door justifies a denial of the reality that millions of Chinese Christians deal with every day – the unregistered but legitimate church of China.
Do they really think that the TSPM/CCC officials are telling the truth and that George Bush, ChinaAid, John Stone [aka Pastor Shi Weihan] (his wife and their children), The New York Times, Christianity Today, Chuck Colson… are all liars or naïve or just ignorant?
An unsent message to the CBME delegation from China I respect you as powerful and intelligent leaders of religious affairs in the world’s largest and perhaps oldest country and civilization. I acknowledge that you are created in the image of God and are precious to him. I accept you as brothers and sisters in Christ if this is your claim. I do not and cannot judge your salvation. I want nothing but the best for you and China.
However, the positions you have taken and communicated through the CBME lead me to assume something about your beliefs and situation.
1.    Perhaps you are blind to the realities related to Christianity in China. In this case, you really believe the things you are communicating about religious freedom and the abundance of Bibles.
2.    Perhaps you are being held in bondage by the strong arm of Communist authorities in China. In this case, you know what you are saying is not true or complete, but you believe harm will come to you or your loved ones unless you share the message provided to you by government officials.
3.    If options one and two do not accurately describe your situation, I would have to conclude that you are consciously and willingly participating in a campaign of error and deception. Whether you are a Christian or not is between you and the Lord of the universe. But your activity in this propaganda campaign is evil.
I pray for you and for China today. May God lead you and China to the peace and harmony found in Christ alone.