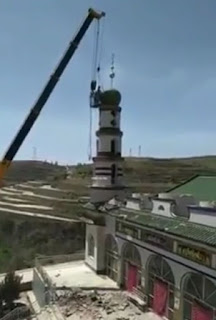 
(Urumqi, Xinjiang—June 22, 2018) Chinese public security bureau minister Zhao Kezhi recently arrived in China’s northwestern Xinjiang and visited Urumqi, Hotan, Kashgar, Kizilsu Kyrgyz Autonomous Prefecture, and the Xinjiang Production Construction Bingtuan No. 14 under the pretense of inspecting anti-terrorist stability maintenance measures. At the same time, Kazakh citizen Yesborati Ahanai revealed that six of his relatives were sent to an “anti-extremist education center” for reading the Qur’an and praying at a mosque.

The Xinjiang government has increased the severity of abuse leveled against ethnic and religious minorities in Xinjiang in an effort to counter “extreme” ideologies and combat the alleged influence of foreign powers into the region. The campaign includes the building of “anti-extremist education centers” and “extreme imam education centers” in order to detain more Muslim and Christian citizens. The research team, headed by Zhao, lauded the Xinjiang government’s efforts to tighten its control over the citizenry. Zhao also ordered the Xinjiang government to strengthen the system of “six in one”—the parts being the Party, the politics, the army, the police, the soldiers, and the people.

This occurred amid a larger crackdown, in which Chinese authorities target innocent ethnic minority citizens, many of whom are Muslims. Such people are often placed in “political training centers,” or detention centers that are known for torturing their inmates.

Additionally, Yesborati Ahanai, a Kazakh citizen originally from Changji, Xinjiang has revealed that the Xinjiang government has demolished and forcibly closed many mosques. He has also stated that six of his family members were arrested for praying, fasting, and reading the Qur’an. The arrested family members are Halibek Hafan, Bahtibek Walihan, Yerjanati Jacksenbai, Tuoliewujiang Jumadeli, Aoreziai Biekyi, and Halimunur Kuobugen. Ahanai noted that none of his arrested relatives are members of the Communist Party. He has likewise asked for assistance from the Kazakh government and other organizations to free his family members from prison.