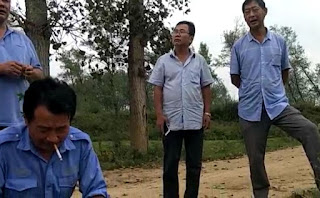 (Nanyang, Henan—Sept. 29, 2017) An official in China’s central Henan province threatened to murder a Christian family when they attempted to harvest peanuts in their field on Sept. 21, part of which was forcibly taken by government-hired gangsters last year.

On the morning of Sept. 21, Bai Fengju, a Christian, and his relatives arrived at his field to harvest peanuts they had planted earlier this year, but were prevented from doing so by local gangsters. Liu Zigeng, a man who headed the same gang to confiscate a portion of Bai’s property in a government-backed bid to build a road leading up to a Buddhist temple, threatened to kill all of Bai’s family should they gather the peanuts.

According to Feng Haiqin, Bai’s daughter-in-law, “[Liu] said he was supposed to collect the peanuts, not us.”

During last year’s construction of the Buddhist temple, Liu razed a bean sprout owned by Bai’s family and bulldozed his farmland in order to build a road that connected the temple to the area outside the village. When Bai tried to defend his land, Liu threatened to beat him to death. Even though Bai repeatedly complained to local government departments, Liu was allowed to keep occupying his land and making threats against his family members.

On Sept. 23, a ChinaAid reporter contacted Zhao Yushan, the village secretary for the region, who claimed the conflict had already been resolved, and Feng said that Liu was invited to the home of an official on Sept. 21 to discuss the matter it, but she doesn’t know what was said.

ChinaAid exposes abuses, such as those suffered by Bai and his family, in order to stand in solidarity with persecuted Christians and promote religious freedom, human rights, and rule of law.