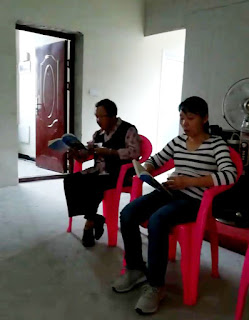 (Xianning, Hubei—Oct. 3, 2017) Provoked by the mission work of a local house church, officials detained a pastor and her daughter on Sept. 22, taking the daughter’s three-year-old son into custody as well.

On the night of Sept. 22, police and religious affairs bureau personnel seized Pastor Xu Shizhen, her daughter, Xu Yuqing, and Xu Yuqing’s three-year-old son, Xu Shouwang, after the two women took part in Zion Church’s efforts to spread the Gospel in local public parks and squares. During these evangelistic efforts, the women sang, danced, performed with bamboo instruments, and preached, even though the local religious affairs, public security, and national security bureaus frequently interrupted them.

When their family members went to the police station on Sept. 24, the police told them that they had separated the women from the child, keeping him at the station while transferring his grandmother and mother to other facilities. It is unknown whether they are under criminal or administrative detention.

A ChinaAid reporter made several unsuccessful calls to the police station and Yang Haijun, the deputy director of the Xianan District Religious Affairs Bureau who spearheaded the persecution of Zion Church. On Sept. 13, Yang led a group of police officers to Change Square, where church members, including Xu Shizhen, had gathered to share their religion with others. The officials detained three Christians and drove the evangelists from the square.

On Aug. 23, the religious affairs bureau sent Xu Shizhen a notice accusing the church of violating the Regulations on Religious Affairs and ordered her to stop the missionary work.

Xu previously pastored Hongqiao Church, a house church that was acquisitioned by the Three-Self Church in April 2012 after officials forcibly occupied its building and damaged church property. Xu Shizhen left the church and founded a new one, but the police kept harassing them.

ChinaAid exposes abuses, such as those suffered by Xu Shizhen, Xu Yuqing, and Xu Shouwang, in order to stand in solidarity with persecuted Christians and promote religious freedom, human rights, and rule of law.