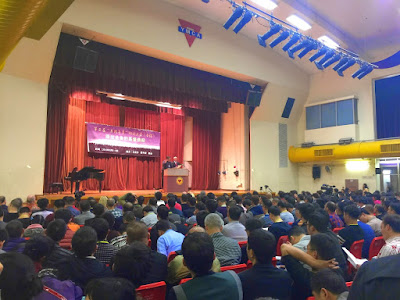 According to Wang, the purpose of the visits was to prevent people from attending a special service planned tomorrow to commemorate the tenth anniversary of a 7.9-magnitude earthquake that killed 69,000 on May 12, 2008. Officials named the anniversary “Thanksgiving Day” according to The New York Times, supposedly to celebrate the progress the area has made since then, but the new nickname has earned much criticism.

Wang said, “During our prayers during last Sunday’s service, we begged our Lord to use us in this city to bring large numbers of government staff and Communist Party members to believe in Him. This week, God drove more than 100 government personnel to visit us, and they contacted more than 50 of our colleagues and members. Is this the result, telling us God has accepted our prayers?”

“The Communist government desperately wants to know one thing: if they threaten Christians and prevent them from gathering, will the number of people going to services significantly increase or decrease?” he continued.

But Wang also seemed uncertain about what may happen between the government and the church and drew parallels between Christianity’s current, persecuted state under the Chinese government and the persecution of the first Christians under Caesar: “The angels and people of the world both wonder what is going to happen when Caesar meets with Christ; when swords meet with the cross in this city.”

He ended his letter with a plea: “Oh, Lord, help us! Please be with our sisters and brothers under the disturbances and threats. Please strengthen them so that they become strong with the grace of Jesus Christ. Oh, Lord, please help us see the abundant glory of the Father so that we can not be fearful or doubtful when we come face-to-face with God through our faith in Jesus Christ!”

Wang is currently with officials being interrogated for “picking quarrels and causing trouble.” Previously he and his wife were prevented from attending a Christian conference in Hong Kong, where he was expected to speak.

ChinaAid exposes abuses, such as those suffered by the members of Autumn Rain Blessing Church, in order to stand in solidarity with persecuted Christians and promote religious freedom, human rights, and rule of law.