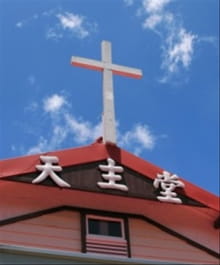 The exhibit is titled “A Lamp to My Feet, A Light to My Path.” Sponsored by the government of China, it’s meant to educate Americans about the history of the spread of Christianity in China from the Tang Dynasty onward.

The irony, of course, is that the same government that is urging us to join in celebrating the spread of Christianity over the centuries is brutally repressing Christians today. ChinaAid, an organization that exposes the persecution of Christians in China, says the exhibit is “a government propaganda ploy” intended to deflect attention from reports of growing religious persecution in China.

None of this comes as a surprise to my great friend, congressman Frank Wolf of Virginia. In his new book, Prisoner of Conscience, about his human rights work around the world, Frank describes his trips to China, where human rights violations are among the worst in the world. How does he know? He’s seen it for himself.

Frank and his friend, congressman Chris Smith of New Jersey, flew to Beijing just prior to the 2008 Olympic Games. The plan was to dine with half a dozen human rights lawyers and underground house church pastors.

But when the Chinese government got wind of this, they started arresting the congressmen’s dinner companions. In the end, only one dissident showed up — and he was arrested the next morning.

So much for religious freedom. When Frank and Chris publicly complained, the Chinese government told them to keep their noses out of China’s internal affairs.

The two were especially concerned with Pastor Zhang Rongliang, who had been tortured with electric shock, and whose family relied on donations from fellow Christians to survive.

Protestants are not the only victims. “At the time of our visit,” Wolf writes, “every one of the approximately 35 underground bishops of the Catholic Church was either in jail, under house arrest, under strict surveillance or in hiding.”

China’s leaders were attempting to brush all this under the rug as the world’s eyes turned to the Olympic Games. Frank Wolf was one of the few people who refused to let them get away with it. Which is why he’s not welcome in China today.

So if you happen to see those Chinese Bibles on display, know it for what it is: A propaganda ploy. Because those who worship the God of the Bible are being arrested, imprisoned and persecuted.

Pray for them and agitate on their behalf with the Chinese Embassy — and with the State Department and your elected representatives! As Frank will tell you, and as I know from my years in the White House, life gets better for dissidents when Westerners advocate on their behalf.

I also urge you to pick up a copy of Prisoner of Conscience by Frank Wolf. You can order one at our book store at BreakPoint.org.

You will learn more about the congressman who makes a habit of dropping in on some of the most dangerous countries on earth, and how you can help him fight global injustice.

Chuck Colson’s daily BreakPoint commentary airs each weekday on more than one thousand outlets with an estimated listening audience of one million people. BreakPoint provides a Christian perspective on today’s news and trends via radio, interactive media and print.