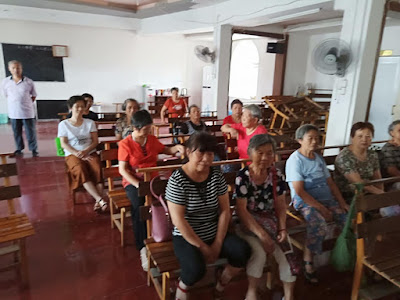 (Xinyu, Jiangxi—July 18, 2018) Churches across Jiangxi received a warning from local authorities in early July, demanding that they dismantle their crosses, replace them with either an image of Chinese President Xi Jinping or the national flag, and keep their children away from church.

In Xinyu—a city within Jiangxi—alone, more than 100 churches received this announcement, triggering fear in many. Some Christians are too frightened to speak up; however others openly refuse to follow the orders. In retaliation, government agents forcibly demolished one church’s cross, and another received a notice stating the government intended to do so.

On Sunday morning, two officials interrupted a village worship service at Kaixuan Church and demanded that the congregants no longer display their cross.

“They want to tear down the cross,” Liu, who is in charge of the church, said. “I made it clear to them that the cross must not be dismantled. They said they didn’t mean this and asked again whether or not we could hang the national flag. Now, they have conceded.”

Another branch of the church located in downtown Xinyu had been asked to demolish their church, but after the members negotiated, the authorities made concessions.

“The church unanimously opposed the cross dismantling,” Liu said. “They asked the religious affairs bureau ‘By which law do you dismantle our cross? Law enforcement should be carried out in accordance with legal procedures.’ The authorities also said that [the Christians] could not bring children to church, that there were policies [opposing this]. I said, ‘Your policy is in conflict with the Constitution. When the children are born, they are citizens of the People’s Republic of China, and they have freedom of belief. Children’s freedom of belief cannot be interfered with. They can follow their parents’ beliefs.”

Liu is referencing Article 36 of the Chinese Constitution, which reads, “ Citizens of the People’s Republic of China enjoy freedom of religious belief.

According to Chinese law, regulations and policies must operate in accordance with the Constitution, not in conflict with it. As such, all ordinances forbidding children from holding religious beliefs should be deemed unconstitutional.

ChinaAid fights for the rights persecuted churches in China, including those in Jiangxi, and exposes the mistreatment they face in order to take a stand against injustice and for religious freedom, human rights, and rule of law.