Clergymen of a TSPM church in Hefei, Anhui Province are Persecuted 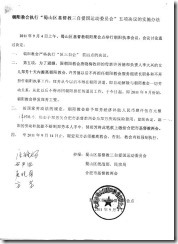 (Hefei city — Oct. 31, 2012) China Aid Association has learned recently that two clergymen from a TSPM church in Hefei, Anhui province left the TSPM church after being persecuted and began serving in a house church.  As a result, government authorities escalated their revenge and persecution of them, even to the point of violence.

At 10 a.m. on September 6, 2012, when Pu Wanming and Zheng Fang were not at home, the director of Shushan District Bureau of Religion, along with the director of Nanqi Police Station and a group of unidentified thugs, broke open the door of Pu Wanming’s residence under broad daylight.  They injured Pu Wanming’s father and hauled away all the furniture in his residence and took his father to the local police station.  At 13 o’clock in the afternoon, when Pu Wanming and his wife returned home, they were shocked and angry at what they found.  They immediately dialed 110.  Half an hour later, a police officer from Nanqi Police Station came to the scene and left by saying only, “I can’t handle this.”  Pu Wanming continued to dial 110, but by 19 o’clock in the evening, Nanqi Police Station still had not sent police officers.

ChinaAid denounces the Hefei authorities in Anhui for their blatant violation of the basic personal rights of citizens and urges them to immediately cease the persecution of Pu wanming and his family and conduct a serious investigation into the liabilities of persons involved in this incident.

Click on the small photo for an enlarged photo:  The related docs of Chaoyang TSPM Church in Shushan District, Hefei. 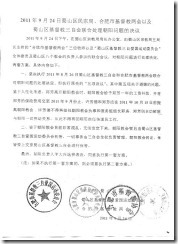 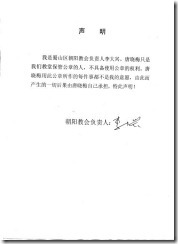 A church in Hefei, Anhui province is being forcibly demolished by people with government connections.