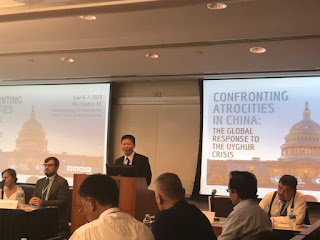 (Washington, D.C.—June 6, 2019) ChinaAid President Bob Fu spoke at a conference focusing on China’s persecution of its Uyghur population today, discussing how the Chinese population is responding to the escalating crisis.

The conference, titled, “Confronting Atrocities in China: The Global Response to the Uyghur Crisis,” began today and will end tomorrow. Its commencement ceremony was held in Room HVC-201 of the U.S. Capitol Visitor Center from 9:00 a.m.-12:30 p.m. on June 6 and featured several prominent experts and U.S. lawmakers, including Senator Marco Rubio and Congressmen Chris Smith and Jim McGovern.

In the afternoon, the conference moved to the State Room of the George Washington University’s Elliott School of International Affairs, located at 1957 E St NW in Washington, D.C., where the rest of the event is being carried out. Fu and several other renowned scholars addressed the Chinese community’s response to Uyghur persecution and put forth a method for supporting the community on a forthcoming basis.

The Chinese government has increased its efforts to persecute Uyghur people in the past few years, subjecting them to racial profiling, religious discrimination, and even imprisonment in concentration camps, where they are tortured, brainwashed, raped, and starved. Because of this, many human rights organizations are championing their cases, urging international policymakers to take concrete action to protect Uyghur rights.