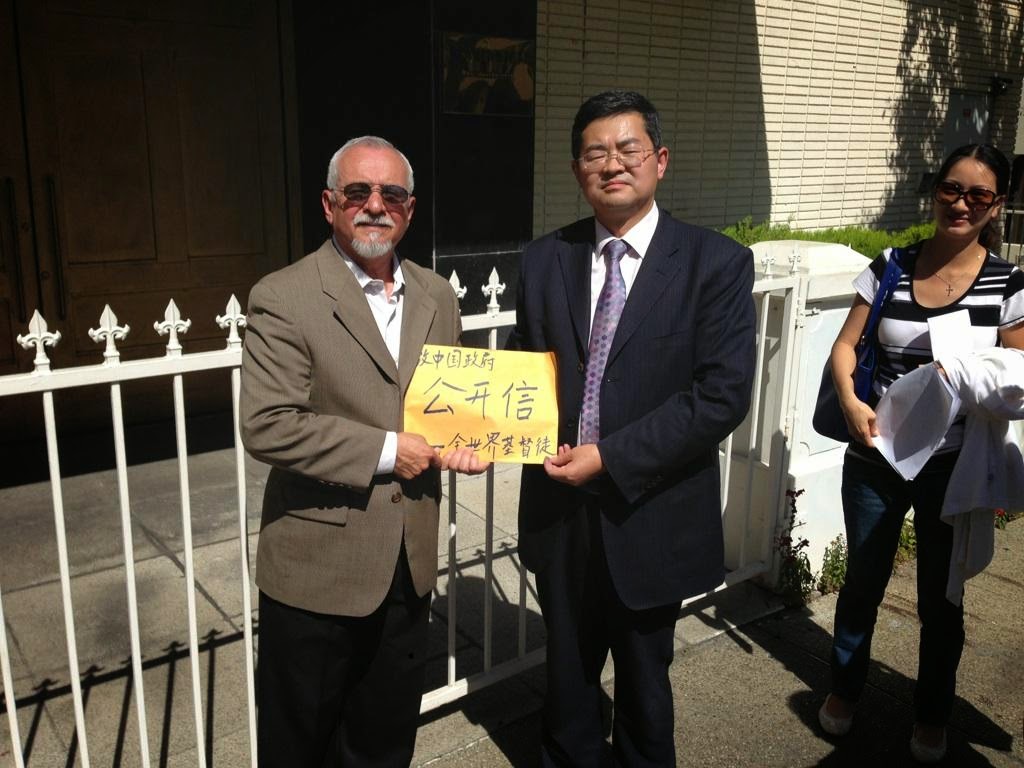 For the entire day of April 28, 2014, the Chinese government, despite a month-long guard and defense of their rights by the local Christians and despite the objections from Christians around the world, brazenly demolished Sanjiang Church, an imposing and magnificent landmark in Wenzhou, known as the “Jerusalem of China.” The government razed the church to rubble and that lofty and “conspicuous” cross finally fell into the debris. Seeing such a scene, Christians worldwide are all crying in sadness and sorrow. Such an act of brutaliy shocks the whole world and both men and God are indignant. This is a rude trampling of the rights to faith of the Chinese Christians and is an unreasonable interference in their otherwise normal religious life. It is also a serious insult on the religious feelings of the Christians worldwide. Such an act of brutality challenges the bottomline of civilization of mankind and ethics, and it is a typical frenzied anti-humanity, anti-civilization, and anti-universal-value act. This act of brutality has already been strongly denounced by the people of the world.

Equivalent to this act of brutality is the destruction of the Bamiyan Buddha [statues] in Afghanistan by the Taliban regime in March 2001, which aroused the indignation of the public. The Taliban tramples on the value of religious freedom, challenges the civilization of the entire human race, and threatens the existence and rights of humanity. Likewise, the Chinese Communist government destroyed Sanjiang Church and doubtlessly, this is a declaration of war against Christianity and humanity. Half a year after the Taliban destroyed the Buddha statue, they and Bin Laden launched the 9/11 terrorist attack against America. We would like to ask this question: What will the Chinese Communist regime bring to the world and the humanity half a year after it destroyed Sanjiang Church? Demolishing Sanjiang Church is just as vicious as destroying the Bamiyan Buddha in its nature, and people of the world and heads of states worldwide should pay intense attention to this, and they should be highly vigilant.

Things don’t end there. Like in the Cultural Revolution when the authorities unfolded the campaign of “wiping out religions,” by taking Wenzhou as a test ground, this time, they started their persecution in Wenzhou again, where the Gospel is flourishing, and then the persecution will spread to the rest of Zhejiang province and even the whole country. Churches are destroyed; crosses are removed; pastors and worshippers are arrested. War alarms are raised everywhere and throngs of famished and homeless people roam the countryside. A nationwide anti-Christian campaign is being waged.

Since the reform and opening up, Christianity has seen a rapid development. They came from underground and became open. Once a marginal entity, they’ve come to the center of our life. From a tributary, Christianity has become the mainstream and is now the main trend of life in China. However, the Communist regime that launched “non-Christianity” campaigns as soon as it came to power in China is trying its best to contain the Christian belief that is becoming open and mainstream in the society. The regime attempts to bury the Gospel underground. This nationwide persecution is not only a heavy blow to the vision of the City Upon a Hill of Chinese Christians, but also a barbaric rejection of people with a loving heart who are spreading the Gospel in China and whom the people of the world are paying attention to. Given this, as Christians who are paying attention to the development of Christianity in China, we hereby put forward four strong demands to the Chinese government regarding the destruction of Sanjiang Church:

2. Investigate the legal liabilities of the people responsible for the forced demolition of Sanjiang Church and pay a compensation for the loss of the church and its worshippers.

3. Please respect the “Joint Declaration of Wenzhou Christians regarding the Government’s Forced Demolition of the Cross and the Church” and stop all forms of actions of violating people’s rights to religious beliefs in Wenzhou, Zhejiang and the rest of China.

4. Clarify the relationship between the church and the state and thoroughly solve the issues concerning the independence, legitimacy and openness of TSPM churches and house churches so as to honor the promise in the Chinese Constitution that every citizen has the right to religious belief and freedom.

Joint Meetings of Overseas Pastors of House Churches of China